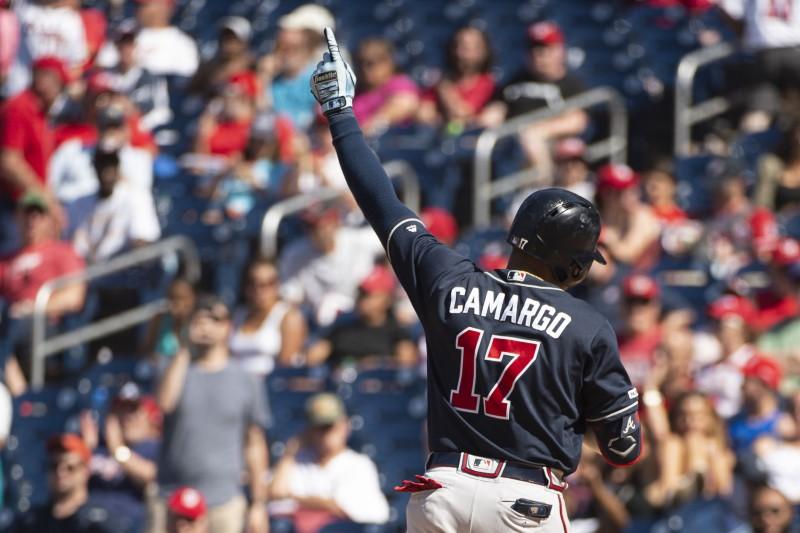 Johan Camargo hit a two-run, pinch-hit homer in the top of the 10th inning to give the Atlanta Braves a 4-3 win over the host Washington Nationals on Sunday.

The Braves took two of three from the Nats to win the series.

Luke Jackson pitched the 10th inning for his 11th save despite giving up a run, two hits and a walk. Trea Turner drove in a run with a fielder’s choice, but the Nats could not plate the tying run.

Tanner Rainey (1-2) gave up a walk to Ozzie Albies with one out in the 10th and then Camargo smashed his second pinch-hit homer of the year into the bleachers in right for a 4-2 lead. A.J. Minter (2-4) pitched one inning to earn the win, fanning Gerardo Parra for the last out of the ninth with the winning run on second.

Will Smith gave Los Angeles its third game-ending home run in three days, all from rookies, with a three-run shot in the ninth inning for a spectacular three-game sweep of visiting Colorado.

Smith, who was called back up to the major leagues earlier in the day, crushed his pinch-hit shot to right-center off Rockies right-hander Scott Oberg (5-1). The Rockies elected to walk veteran Russell Martin to face Smith.

The Astros hit four homers to halt their longest losing streak since June 4-10, 2015. Houston avoided losing eight straight for the first time since a 15-game skid in September 2013.

Verlander (10-3) helped the Astros get their first win since June 15 by allowing three runs on four hits. Verlander struck out nine and walked two.

On a day for noteworthy home runs, Javier Baez made the 100th of his career one to savor, rallying Chicago to victory over visiting New York.

Baez’s three-run shot in the eighth inning off right-hander Seth Lugo helped prevent Chicago’s first three-game losing streak at home this season. It was just the second home run for the Cubs in a four-game series against the Mets, while New York hit nine.

The Mets’ Pete Alonso also went deep, setting the club record for rookie home runs with 27 a day after tying Darryl Strawberry’s rookie mark, set in 1983. Alonso hit his home run to center field against Cole Hamels in the fourth.

San Diego took a 10-7 lead in the top of the 11th against Francisco Liriano (2-1) for its second three-run lead.

In the bottom of the inning, Phil Maton walked Bryan Reynolds, struck out Starling Marte and gave up a single to Josh Bell. Melky Cabrera’s RBI double made it 10-8. Matt Wisler (2-2) relieved and gave up a tying two-run single to Jacob Stallings. A single and walk loaded the bases before Wisler walked Newman.

Jordan Yamamoto allowed the first runs of his career but made franchise history by winning his third start in as many tries as Miami completed a three-game sweep at Philadelphia.

The Marlins, who have the worst record in the National League at 30-46, completed their third series sweep of the season. The Phillies, who have dropped seven straight, were swept for the third time.

Yamamoto (3-0), who opened his career by throwing seven scoreless innings in back-to-back starts against the St. Louis Cardinals, saw his shutout streak end in the first inning Sunday. He walked the first three batters before Jean Segura gave the Phillies a 2-1 lead with a two-run, one-out single.

Eric Sogard added a home run and Danny Jansen had a two-run single for the Blue Jays.

The Blue Jays won the three-game series — their fourth series win on the road this season — despite losing the opener. They have six wins in their past 12 games after going 2-11.

Carlos Santana launched his team-leading 17th homer and rookie Zach Plesac (3-2) tossed seven strong innings for the Indians, who have won eight of nine against Detroit this season.

Jason Kipnis ripped a two-run single and Francisco Lindor, Kevin Plawecki and rookie Oscar Mercado each drove in a run as Cleveland cruised to its eighth victory in 10 games.

Tommy La Stella and David Fletcher each had two hits and two RBIs as visiting Los Angeles held on for a win against St. Louis to avoid getting swept in the three-game series.

Albert Pujols started his third straight game at first base and went 2-for-5 for the Angels, who ended a three-game losing streak.

Pujols played 11 seasons in St. Louis and won two World Series titles and three National League Most Valuable Player awards for the Cardinals before signing with the Angels following the 2011 season.

Milwaukee scored five runs in the third inning, and Brandon Woodruff earned his team-high ninth win in a victory over visiting Cincinnati.

The five-run inning helped Milwaukee earn a split in the four-game series, taking the last two games against their National League Central rivals.

Homer Bailey (7-6) picked up the win for Kansas City. He allowed just one run on five hits in 5 1/3 innings. He threw 108 pitches, one outing after a season-high 121 pitches against Seattle. His final batter was Eddie Rosario, who struck out after a 14-pitch at-bat.

Kevin McCarthy pitched the final 2 1/3 innings for his first career save.

After the A’s had taken a 1-0 lead in the second on a Rays error, the visitors grabbed the lead for good in the third off Oakland starter Brett Anderson (7-5). With one out, Mike Zunino walked and d’Arnaud belted his fourth home run of the season.

J.P. Crawford went 4-for-4 with a home run and four RBIs as Seattle defeated visiting Baltimore.

Mac Williamson also homered for the Mariners, who took three of four games in the series.

Trey Mancini homered for Baltimore, which was trying to win back-to-back games for the first time since May 6 after snapping a 10-game losing streak Saturday with an 8-4 victory.

Adrian Sampson allowed just one run in seven innings as Texas held on to win the rubber game of its three-game series over visiting Chicago.

Sampson (6-4) scattered seven hits with one walk and four strikeouts in winning for the sixth time in his past seven decisions. The Rangers turned three double plays.

Tim Federowicz and Danny Santana both hit homers in the Rangers’ four-run second inning against White Sox starter Ivan Nova (3-6), who allowed another run in the fifth. In six innings, he gave up eight hits and a walk, striking out six. Only three of the five runs were earned.

Tim Locastro lined a bases-loaded single over third base with one out in the 10th inning as Arizona ended a season-high six-game losing streak with a victory over San Francisco in Phoenix.

Christian Walker singled to open the 10th inning off Mark Melancon (3-2), and Jarrod Dyson walked with one out. The runners advanced on a wild pitch, and Carson Kelly was intentionally walked to load the bases for Locastro, who delivered his second walk-off hit this season.

Walker had three hits and an RBI, Locastro had two singles and two RBIs and Eduardo Escobar had two hits for the Diamondbacks, who were in danger of falling three games below .500 for the first time since April 13.