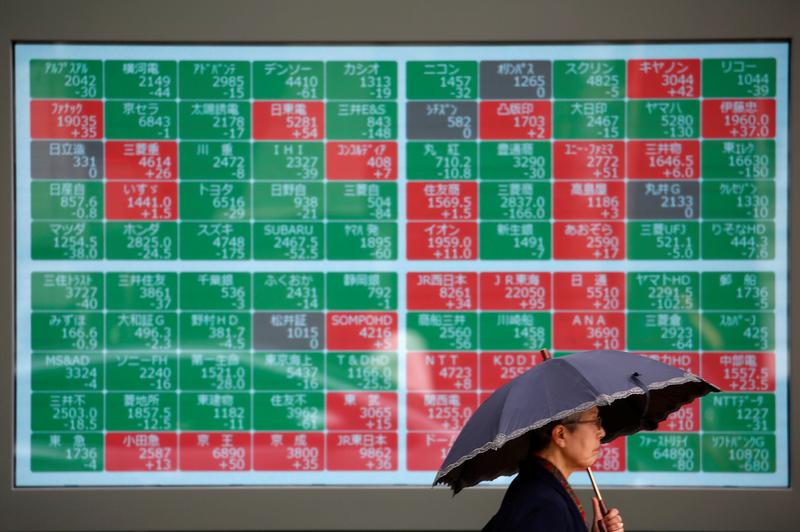 LONDON (Reuters) – European stocks stumbled and the dollar dropped to three-month lows on Monday as hopes waned for progress in Sino-U.S. trade talks at this week’s G20 meeting and fears grew of a confrontation with Iran.

Investors are waiting to see if Presidents Donald Trump and Xi Jinping can de-escalate a trade war that is damaging the global economy and souring business confidence. The leaders will meet during a G20 summit in Japan.

However, gains in Asia saw the MSCI regional and global stocks gauges rise again towards last week’s six-week highs. Wall Street also looked in line for more gains after closing lower on Friday. S&P 500 e-minis pointed to a 0.2% rise at the open.

“G20 is turning into a high-stakes poker game for risk, and if the sideline talks between Trump and Xi fail and trigger an escalation in tariffs, the odds of a full-blown global recession increase exponentially,” said Stephen Innes, managing partner at Vanguard Markets.

On Monday, Chinese Vice Commerce Minister Wang Shouwen said China and the United States should be willing to compromise in trade talks and not insist only on what each side wants.

U.S. Vice President Mike Pence’s decision on Friday to call off a planned China speech was also considered a positive sign. Pence had upset China with a fierce speech in October that laid out a litany of complaints ranging from state surveillance to human-rights abuses.

Still, most analysts doubt the two sides will come to any meaningful agreement. Tensions are reaching beyond tariffs, particularly after Washington blacklisted Huawei, the world’s biggest telecoms gear maker, effectively banning U.S. companies from doing business with it.

“Any high hopes ahead of the G20 meeting may be disappointed,” said Benjamin Schroeder, senior rates strategist at ING in Amsterdam. “In the end, uncertainty will persist and central banks could still be pushed closer to invoking their contingency plans.”

The U.S. Commerce Department said on Friday it was adding several Chinese companies and a government-owned institute involved in supercomputing to its national security “entity list”, which bars them from buying U.S. parts and components without government approval.

A Chinese newspaper said FedEx Corp was likely to be added to Beijing’s “unreliable entities list”.

U.S. markets had reached record highs after last week’s signals by the Federal Reserve that it may cut interest rates soon to bolster the U.S. economy. [.N]

However, that weakened U.S. currency, causing a dollar index to slip 0.1% lower to 96.11 after its biggest weekly drop in four months last week.

The dollar has led a broad selloff in major currencies as global central banks signaled a dovish outlook on monetary policy amid growing signs of a weak global economy.

“The market is not expecting more Fed rate cuts than it had so far, but that the reasoning behind them is being interpreted in a different manner,” Commerzbank’s head of FX and commodity research, Ulrich Leuchtmann, wrote in a note to clients.

“While for a long time the expected weakening of growth, fears of a recession and low inflation were used as reasons for rate cuts, another reason has now been added to the list: the Fed caving in to the White House.”

In developing markets, the Turkish lira strengthened as much as 2% after Turkey’s main opposition party won Istanbul’s re-run election for mayor, a blow to President Tayyip Erdogan.

Bitcoin pulled back from 18-month highs after jumping more than 10% over the weekend. Analysts said the gains came amid growing optimism over the adoption of cryptocurrencies after Facebook announced its Libra digital coin.

Economic woes, looming U.S. interest rate cuts and tensions between Tehran and Washington drove gold higher. The precious metal stood at $1,404.79 per ounce, not far from Friday’s six-year high of $1,410.78.

The rising tensions between Iran and the United States, after Iran shot down an American drone, also pushed oil prices higher. U.S. Secretary of State Mike Pompeo said “significant” sanctions on Tehran would be announced.