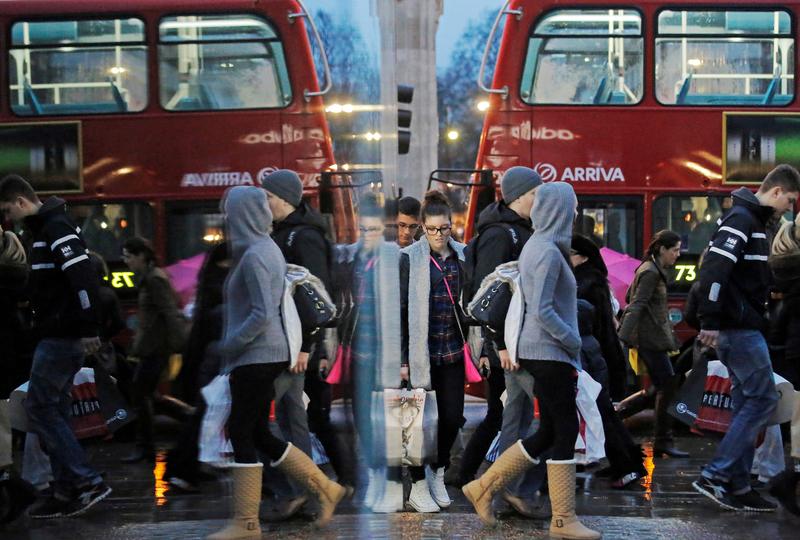 FILE PHOTO: Shoppers are reflected in a shop window as they walk along Oxford Street on the last Saturday before Christmas, in London, Britain December 21, 2013. REUTERS/Luke MacGregor

It said it expects spending to rise by 1.6% over last year, although that would be faster than an estimated 1.3% growth in the broader UK economy in 2019.

Consumer spending benefited from robust employment growth and a strong pick-up in real earnings growth in the second half of 2018 and early 2019 but the outlook was now weaker, the economic forecasting group said.

“The improvement in purchasing power has meant that consumers have been significantly less affected in their spending decisions than businesses by uncertainties over the economy and Brexit,” said Howard Archer, chief economic advisor to the EY ITEM Club, which produces quarterly UK economic forecasts.

“While consumer confidence in late 2018/early 2019 weakened to the lowest level since mid-2013, perceptions of personal finances and a willingness to spend generally held up much better than views of the economy.”

The forecaster, which is sponsored by business consultancy EY, said it suspected earnings growth peaked in early 2019. It was likely to remain modestly below that level over the rest of 2019 and possibly beyond.

It said strength in the labour market would increasingly fray over the coming months as companies tailored their behaviour to a lacklustre domestic economy, prolonged Brexit uncertainties, an unsettled domestic political situation and a challenging global environment.

EY head of UK retail Julie Carlyle said despite consumer spending comparing favourably to other parts of the economy, it was far weaker than it has been in previous years.

“Retailers are therefore fighting for a shrinking piece of the pie and this is reflected in the recent turbulence on British high streets,” she said.

“And, while the economy won’t deliver retailers growth, they will have to find it from other areas and this means having a strong understanding of their customers.”