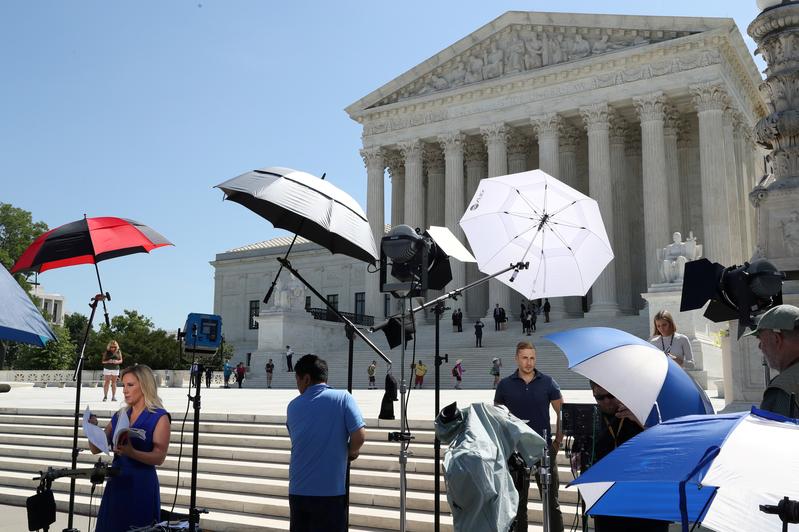 WASHINGTON (Reuters) – The U.S. Supreme Court, approaching the end of its current term, is due to issue rulings in the coming days in major cases including the Trump administration’s bid to add a contentious citizenship question to the 2020 census and efforts by voters to curb the partisan manipulation of electoral district boundaries.

FILE PHOTO: Members of the media wait for decisions outside of the U.S. Supreme Court in Washington, D.C., U.S., June 17, 2019. REUTERS/Leah Millis/File Photo

The court, which has a 5-4 conservative majority, has 12 cases left to decide during its current term, which began in October and is expected to conclude by the end of June, with some rulings scheduled to be issued on Monday.

Eagerly awaited rulings in legal challenges to the proposed census question and a practice called partisan gerrymandering could have enduring effects on elections for seats in the U.S. House of Representatives and state legislatures.

Critics have called the move by President Donald Trump’s Commerce Department to add a citizenship question to the census a Republican scheme to deter immigrants from taking part in the population count for fear of deportation. The aim, these critics have said, is to engineer a deliberate undercount of places with high immigrant and Latino concentrations, costing Democratic-leaning areas seats in the House to the benefit of Republicans and non-Hispanic whites.

The justices are hearing the administration’s appeal of a judge’s January ruling in New York blocking the question as a violation of a federal law called the Administrative Procedure Act. Two other courts subsequently blocked the question. During April’s argument in the case, the court’s conservative majority appeared to be inclined to rule in favor of Trump.

The administration has argued that adding a question requiring people participating in the decennial population tally to declare whether they are a citizen is needed to better enforce a voting rights law, a rationale that opponents called a pretext for a political motive.

A group of states including New York and immigrant rights organizations sued to prevent the question.

Separate cases from North Carolina and Maryland focus on whether the justices will empower courts to impose restrictions on partisan gerrymandering, the practice in which electoral districts are drawn purely to amplify the political power of the party already in control of a state’s legislature.

Boundaries for House districts and those in state legislatures are redrawn every decade to reflect population changes measured by the census.

The court’s current term is the first since conservative Justice Anthony Kennedy announced his retirement at the end of last year’s term, in June 2018.

Kennedy, who sometimes sided with the liberal justices on topics such as abortion and gay rights, was replaced by conservative Justice Brett Kavanaugh, Trump’s second appointee to the court since becoming president in 2017. Kavanaugh was narrowly confirmed by the Republican-controlled Senate in October following allegations of sexual misconduct dating back decades that he denied.

None of the nine justices, who serve lifetime appointments to the nation’s top judicial body, has publicly indicated plans to retire at the end of this term, which is when such announcements are often made. The oldest of them are two of the court’s four liberals: Ruth Bader Ginsburg (86) and Stephen Breyer (80). The longest-serving current justice, Clarence Thomas, joined the court in 1991 and turns 71 on Sunday.

Before the term ends, the justices also will announce whether or not they will hear various pending appeals.

Three of these concern Trump’s attempt to end a program called Deferred Action for Childhood Arrivals (DACA), launched in 2012 by his Democratic predecessor Barack Obama, that protects from deportation hundreds of thousands of immigrants dubbed “Dreamers” who were brought illegally into the United States as children.

In one of the major cases already decided, the court last Thursday ruled 7-2 that a 40-foot-tall (12 meters) war memorial shaped like a Christian cross standing on public land in Maryland does not amount to unconstitutional governmental endorsement of religion.

For a graphic on major Supreme Court rulings, click tmsnrt.rs/2V2T0Uf

Reporting by Lawrence Hurley; Additional reporting by Andrew Chung; Editing by Will Dunham