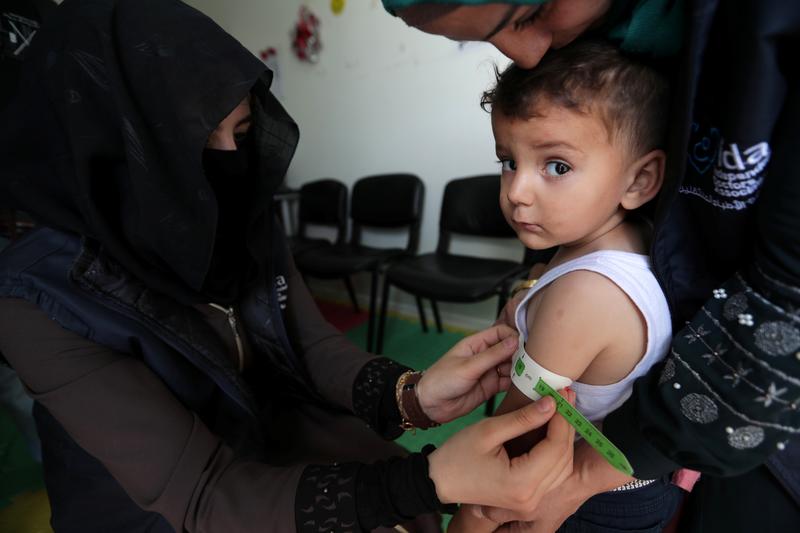 AZAZ, Syria (Reuters) – The Syrian war has inflicted all kinds of hardships on Najwa Abdelaziz but she still manages to make light of one of them. “The uprising ruined my teeth,” she jokes while getting dental care for the first time in years in the back of a truck.

The 33-year-old could not find help for her toothache even after she fled Islamic State rule and took refuge in northwest Syria. But a dentist in a mobile clinic has now arrived at the Rayyan camp where she lives with her husband and four children in a tent among the trees.

“We kept getting uprooted, so we were cut off from doctors,” said Abdelaziz, whose family was smuggled out of Raqqa city some three years ago.

They wound up in Syria’s northwest corner, the country’s last major rebel stronghold. The camps are overflowing, the doctors are too few, and many hospitals have collapsed under government bombing.

In the camps along the Turkish border, often the only healthcare for people like Abdelaziz comes from mobile doctors and makeshift clinics in tents.

“Many just take pills and stay silent about the pain,” said Bassel Maarawi, 57, the dentist who goes around seven camps in the border strip held by Turkey-backed rebels.

The dental mobile clinic stays at each camp a few months at a time, treating dozens of patients every day who can not go into town to see a doctor.

It belongs to the Independent Doctors Association, a Turkey-based Syrian group also running a free camp facility including a clinic for women, children, and internal medicine as well as a pharmacy.

Maarawi himself was uprooted in late 2016 from his city of Aleppo, where the army crushed rebels with Russia and Iran’s help after a bitter siege.

The children he treats now, living in the dirt and drinking filthy water, often suffer from malnutrition. “Many people were displaced recently which really affected them mentally, you can see it when they come in,” he said.

A new wave of fighting has sparked yet another exodus, with hundreds of thousands of people fleeing an army offensive in northwest Syria since April.

At a camp for some 14,000 people in the border village of Shamarin, Ammar al-Omar runs a physiotherapy clinic inside a large tent.

The staff – a medical professional and three volunteers he trained – made most of the equipment themselves and get by on just a few donations. They treat everything from back pain to battle wounds for patients including rebel fighters and paralyzed children.

“There are many injuries because of the fierce bombing,” Omar said. “The patients can’t afford food let alone transportation.”

Um Mhamad, 29, has carried her son from another camp nearby and walked to the tent clinic for more than two years. An injury at birth had crippled the six-year-old boy, whose family was shuttled out of Aleppo in 2016.

“He used to not move at all,” she said. “Today, he can crawl and turn on both sides and stand up.”

Reporting by Khalil Ashawi in Azaz; Editing by Louise Heavens