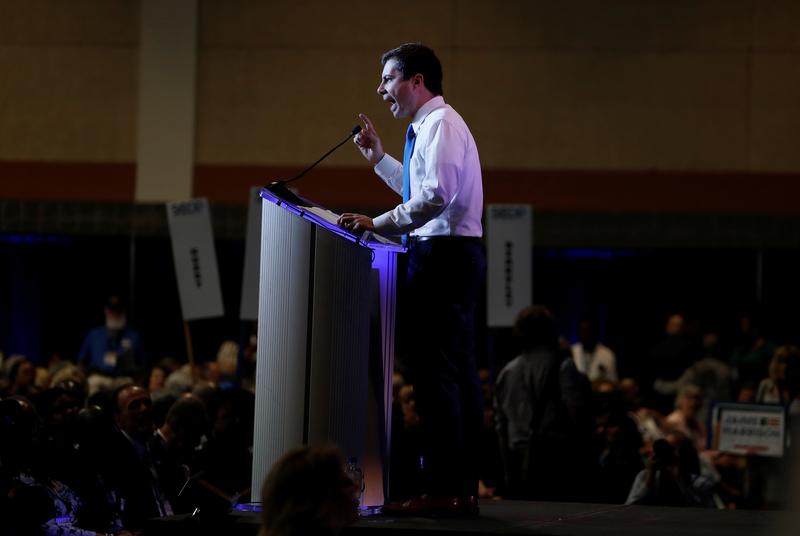 SOUTH BEND, Indiana (Reuters) – Democratic presidential candidate Pete Buttigieg on Sunday faced growing fallout over a fatal police shooting in South Bend, an incident that has exposed simmering racial tensions in the Indiana city where he is mayor and which is complicating his presidential ambitions.

Buttigieg answered questions at a frequently raucous and angry meeting with South Bend residents in which he was heckled, booed and screamed at by a minority of audience members. He admitted efforts to make the city’s police force more diverse had failed, “and I take responsibility for that.”

Buttigieg appeared a week after the fatal shooting of a black man, Eric Logan, by a white police officer exposed longstanding accusations among many African Americans in South Bend that elements within the city’s predominately white police force are racist.

The mayor, who is white, has been struggling to attract support for his presidential bid among black voters, a vital constituency in a Democratic nominating contest. The police shooting has laid bare anger among many in South Bend’s black community, not just about police conduct, but a belief that many African American neighborhoods have been left behind while Buttigieg has revitalized more affluent, whiter areas.

Speaking to reporters after the meeting, a clearly emotional Buttigieg said anger and frustration over race relations in the city had been “hurled” at him. He said he did not know if it was smart politically to open himself up to such audiences, but “it’s my city, and I love my city. It’s my job to face it.”

He also took to the stage just hours after another fatal shooting in the city, which left one person dead and nine injured in a bar early on Sunday morning.

Buttigieg, 37, remained calm throughout the town hall meeting even as he struggled to make himself heard, shouted down by mainly black protesters, some of whom shouted “liar!” as he sought to explain how he will deal with the shooting investigation, and as he promised transparency.

He said he wanted an independent, outside investigation of the police shooting, and will also ask the U.S. Justice of Department to investigate.

The growing and racially-charged crisis in the city where he has been chief executive since 2012 threatens to stall the progress Buttigieg had been making in national presidential polls among the two dozen Democrats seeking to become the party’s candidate to take on Republican President Donald Trump in next year’s election.

National scrutiny is growing on how he deals with events in South Bend, where levels of trust between many blacks and the police force is extremely low. Buttigieg pledged to take steps to build that trust, and invited community input. “This is the beginning of the conversation, not the end,” Buttigieg said.

Buttigieg has been forced to leave the presidential campaign trail for most of the past week to deal with the shooting’s fallout, exacerbated by the white officer’s failure to film the fatal encounter with his body camera.

The mayor has had a rocky relationship with some of the city’s black residents, stemming in part from his decision to fire the African American police chief early in his mayoral tenure, and replace him with two consecutive white police chiefs.

One black audience member, shouting at Buttigieg as he sat next to the city’s white police chief, whom he had just given his backing to, yelled: “How do you expect us to trust you?”

The fact that Buttigieg is being noisily confronted with the issue of race at home comes in a week when Congress held hearings about reparations for the descendants of slaves, and just days before the first Democratic debates. Events in South Bend are threatening to significantly undermine what had been a relatively trouble-free campaign.