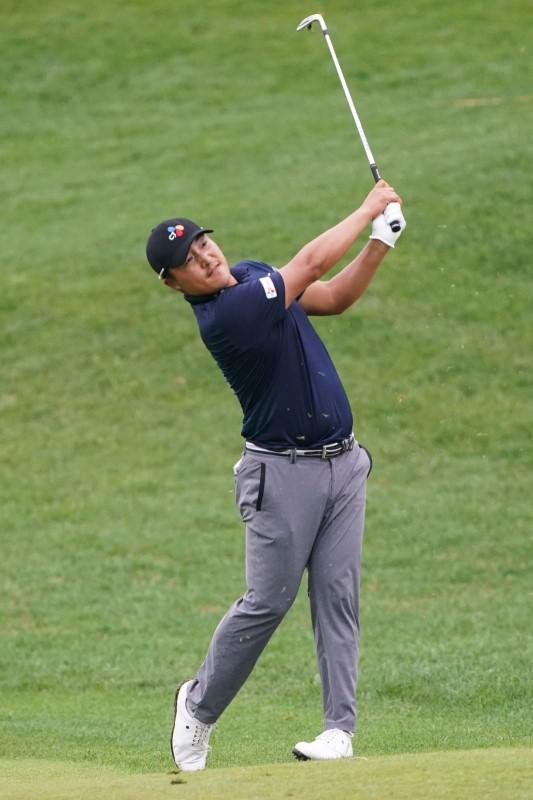 (Reuters) – PGA Tour rookie Lee Kyoung-hoon of South Korea used a hot start and two back-nine birdies to move into a six-way share of the lead after the first round lead of the Travelers Championship in Cromwell, Connecticut on Thursday.

Lee, who missed the cut at last week’s U.S. Open, went out in the afternoon at TPC River Highlands and birdied four of the first six holes and then added another two at the 13th and 17th for a career-low, six-under-par 64.

Britain’s Paul Casey arrived at the par-four 18th in a share of the lead but failed to hit the green with his approach and then settled for a closing bogey after missing a 16-foot par putt that left him in a group of six players one shot back.

Patrick Cantlay was also cruising along with a chance to grab the outright lead until a bad swing at his penultimate hole ultimately left him two strokes behind the leaders.

Cantlay, who won the Memorial Tournament less than three weeks ago, started on the back nine and was tied for the lead before a double-bogey at the par-three eighth where his tee shot found the water in front of the green.

The American, who has eight top-10 finishes in 15 events played this season, closed with a par for a four-under-par 66 that left him in a share of 13th place.

“Just hit it a little fat, and it’s got to get up in the air to get the wind,” Cantlay said of his tee shot at eight.

“It was downwind and didn’t get the wind because I hit it fat and it went in the water.”

Norwegian Viktor Hovland, who was the low amateur at last week’s U.S. Open, shot a three-under-par 67 in his professional debut to sit tied for 25th.

Tournament favorite Brooks Koepka, fresh off a runner-up finish at the year’s third major, mixed four bogeys with three birdies for a one-over-par 71 while defending champion Bubba Watson (69) was five shots behind the leaders.

Reporting by Frank Pingue in Toronto; Editing by Greg Stutchbury