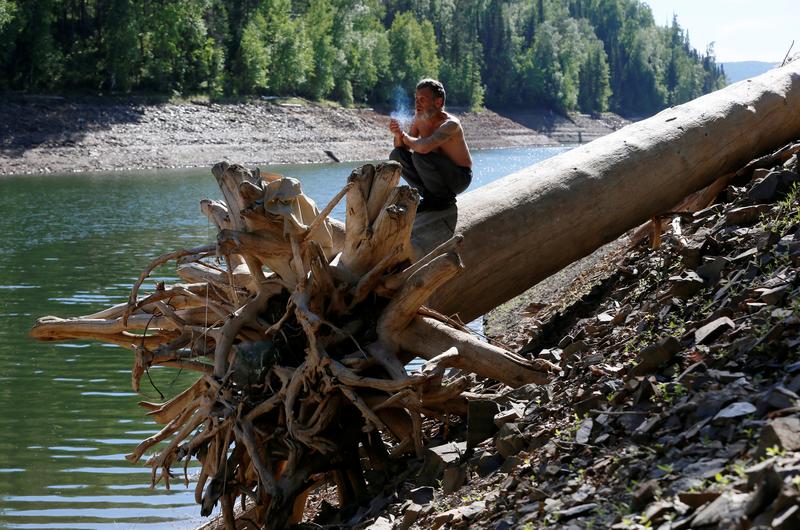 Former bargeman Viktor, 62, smokes as he sunbathes on a bank of the Yenisei River, outside Krasnoyarsk, Russia June 18, 2019. REUTERS/Ilya Naymushin

KRASNOYARSK REGION, Russia (Reuters) – Viktor, 62, turned his back on society 16 years ago and moved to the remote forest wilderness of Russian Siberia where he lives in seclusion in a wooden hut, studying the Bible and foraging for food.

Gray-bearded, enigmatic and with a huge tattoo of Christ across his back, the former barge operator refuses to disclose his surname. The hut he built himself sits on the banks of the Yenisei River which carves through Siberia.

One long-time acquaintance – a former police officer – who knows Viktor from chance encounters while sailing by on a boat says the hermit shunned society after he was jailed – on charges he denied – over the sinking of a barge he was operating.

He moved there after serving several years in jail, the former officer said.

Viktor declined to talk about his past.

Nowadays, he lives on fresh fish, berries and mushrooms, and refuses to use medicine. He fell gravely ill last year from a tick bite, he says, but recovered by praying with his ceramic cross and eating hand-picked herbs.

In winter, he braves icy climes by heating his hut using a gas cylinder. When the seasons change, he feels himself physically rejuvenate along with the wildlife around him, he says.

He sometimes comes into contact with people when they sail past on boats or stop to buy fish. Viktor himself very occasionally leaves his seclusion, crossing the two-kilometer-wide river to buy cigarettes.