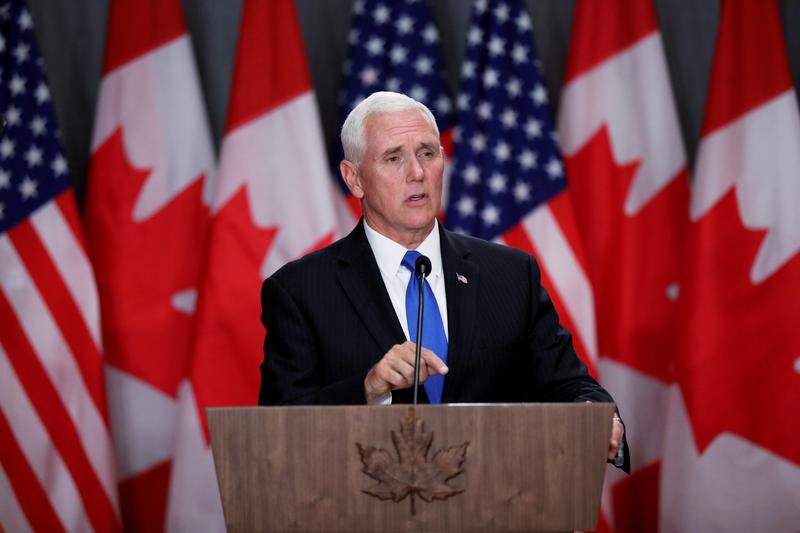 WASHINGTON (Reuters) – U.S. Vice President Mike Pence on Friday called off a planned China speech that had been initially cast as a sequel to a blistering broadside he delivered in October, a move aimed to averting increasing tensions with Beijing, a White House official said.

The decision came a week ahead of what could be pivotal talks on the U.S.-China trade war between U.S. President Donald Trump and Chinese President Xi Jinping on the sidelines of a G20 summit in Osaka, Japan.

The two nations have slapped tariffs on hundreds of billions of dollars’ worth of each other’s goods and the meeting is aimed at discussing whether a further escalation in tariffs can be avoided.

“There is room for progress, and even if incremental, we didn’t want to step on that potential,” a White House official said, speaking on condition of anonymity about why the speech was called off.

Trump and Xi spoke by phone on Tuesday about the summit and formally agreed to meet to talk about the trade war.

“Following the positive conversation with President Xi, the president and the (vice president) thought it would be more appropriate to give the speech after the G20,” the official said. The cancellation was first reported by the Wall Street Journal.

The decision did not come as a complete surprise. There were rumors in Washington for weeks that Pence would soften the tone of his follow-up speech, or cancel it altogether. White House officials had repeatedly said plans had not changed, though they were tight-lipped about the details.

“It sends a terrible message to China that America won’t stand firm, that everything is negotiable with President Trump, even core U.S. values and interests,” said Ratner, now at the Center for a New American Security.

Pence’s aides first announced that he would give another speech on China on May 29, raising concerns in China and the U.S. business community that tough rhetoric on human rights and other issues could roil chances for a detente in the trade war.

The timing was also sensitive because of recent mass demonstrations in Hong Kong and the June 4 anniversary of the Tiananmen Square massacre.

Pence had shocked China-watchers with a speech in October in which he laid out a litany of complaints, chastising China for building “an unparalleled surveillance state” and for government-run camps in the Xinjiang region where Muslim Uighurs “endure around-the-clock brainwashing.”

Pence – who is known for his advocacy of religious liberty and democratic principles – had slammed China for meddling in U.S. politics and accused Beijing of economic and military aggression around the globe.

While the speech was upsetting to China, it had no discernable impact on the last round of Trump-Xi trade talks at the end of November, when the leaders agreed to a ceasefire in the trade war that held until May.

Reporting by Roberta Rampton in Washington and Ismail Shakil in Bengaluru; Editing by Chizu Nomiyama and James Dalgleish