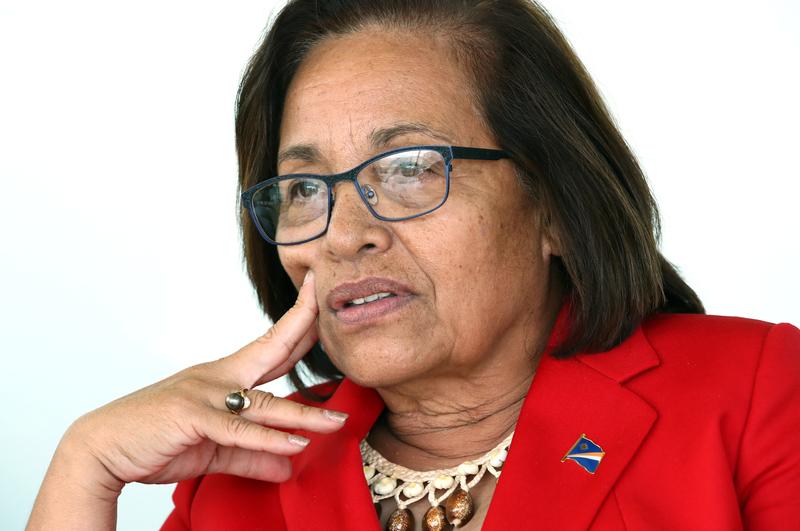 GENEVA (Reuters) – The Marshall Islands is literally struggling to stay above water but its President Hilda Heine told Reuters she had saved her breath rather than try to persuade U.S. President Donald Trump to hear its climate change message.

Heine met Trump at the White House last month, along with the presidents of Palau and the Federated States of Micronesia, both of which are also under threat from rising sea levels.

But they did not talk about climate change.

“We made a conscious decision to discuss those things that we think we could accomplish, rather than spend time talking about something that we know is not going to happen,” she said.

“We know that we’re not going to be able to change his mind in 30 minutes about climate change.”

The Marshall Islands, comprising 31 tropical atolls between Australia and Hawaii, risks being underwater in 10-20 years.

“If that’s not scary enough, I don’t know what is. For us, it’s of course an existential issue,” said Heine, who was in Geneva to open a diplomatic mission, address the International Labour Organization and press her country’s case for a seat on the U.N. Human Rights Council.

The scene of massive U.S. nuclear tests in the 1950s, it is also at risk of disaster from radioactive debris the U.S. military left behind.

Her government has put a line item in its budget to cope with environmental costs, with about 5% of spending set aside to fund sea walls to save at least its two most populated areas.

On climate change, Heine said she had a simple message for the world: “Get real. Climate change is here. It’s not anything to just talk about and think, that is going to happen. It’s happening.”

The official statement from the White House meeting cited “the region’s most pressing issues, including responding to natural disasters”, but not climate change or rising sea levels.

The main topic was renewal of U.S. financial grants and the rollover of a Cold War-era defense and security agreement.

The Marshall Islands was occupied by Allied forces in 1944 and placed under U.S. administration in 1947. Between 1946 and 1958, the United States detonated 23 atomic and hydrogen bombs on Bikini and Enewetak atolls, debris from which was left buried under a shallow concrete dome on Enewetak.

“We’re told it’s seeping into the lagoon,” Heine said, adding that the government wanted help to assess the damage and impact on marine life and potential costs of making it safe.

Asked if it was potentially a nuclear disaster on top of a climate emergency, she said: “It could be.”

The Marshall Islands gained independence in 1986 and later tried in vain to sue nuclear powers in a David-and-Goliath case at the International Court of Justice.

It now has a “nuclear justice strategy” to cope with displacement and higher cancer rates, but cannot back a treaty banning nuclear weapons because of one provision that would force it to take care of its own clean-up, Heine said.

“The United States would be … off the hook.”

China is meanwhile “getting more foothold in the region” and trying to pressure countries there to stop recognizing Taiwan, which Beijing regards as a renegade Chinese province. One tactic is to pressure ship operators not to register their vessels with the Marshall Islands, Heine said.

The country has announced plans to raise funds through the launch of a sovereign cryptocurrency in 2021, although the International Monetary Fund has raised concerns about the idea.

The government said earlier this month that the cryptocurrency would be compliant with the Financial Action Task Force, which sets global standards for fighting money laundering.

To be known as the SOV and still being developed, it will be legal tender and the islands’ official currency once launched, although Heine said that would not happen “until the issues are ironed out”.