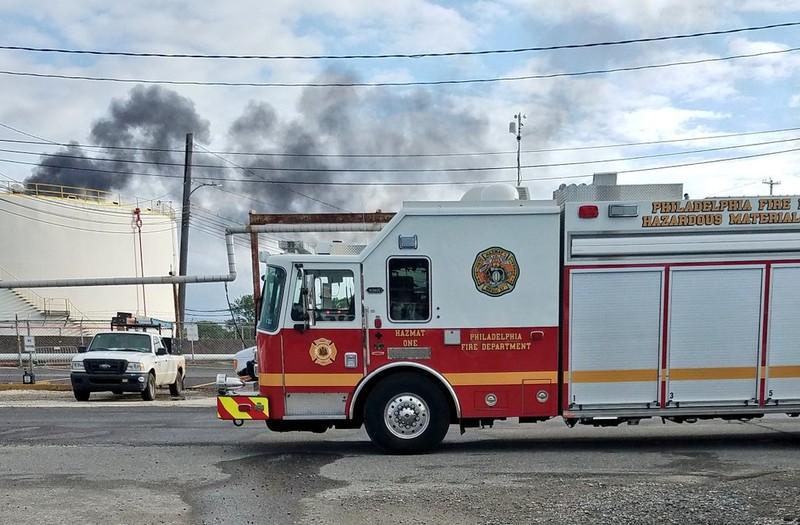 PHILADELPHIA (Reuters) – A massive fire at Philadelphia Energy Solutions Inc’s oil refinery on Friday damaged the largest U.S. East Coast plant to the point that it could remain shut for an extended period, according to Philadelphia city officials and company sources.

As of late afternoon, the fire was “confined and contained,” but could not be put out entirely, because a connection line feeding fuel to the tank where a combination of propane and butane was burning could not yet be shut, Philadelphia Deputy Fire Commissioner Craig Murphy said in a press conference.

The cause and extent of the damage were unclear, Murphy said.

Several explosions sent a huge fireball into the sky, engulfing the surrounding areas in smoke after 4 a.m. EDT (0800 GMT), following the ignition of a fire that started in a tank at the 335,000 barrel-per-day (bpd) refining complex, also the oldest in the Northeast.

By mid-afternoon, the city’s fire department was working with PES in its response to the fire, though it was letting the flammable gases burn under control. Murphy said PES was not yet able to access a valve that would shut the connection to the tank. The fire department could not entirely extinguish the fire as long as it is being fed fuel, he said.

PES said in a statement it believed the product that was burning was “mostly propane.” Local news showed large water cannons continuing to hose down the site.

Four workers were injured, according to a company statement, and treated on-site, while city emergency workers treated one person, who did not need to go to the hospital. The extent of the damage was unknown, but similar fires have shut refineries for months or years.

“It was the worst I’ve ever experienced,” said a veteran refinery worker who was at the plant when the fire broke out.

“It looked like a nuclear bomb went off. I thought we were all going to die.”

The complex was still running at a reduced rate, PES said, but depending on the extent of the damage, there will be questions as to whether the company has enough money to rebuild.

Friday’s incident comes just after a June 10 fire at the same refinery, which according to a source familiar with operations, affected a 50,000 bpd catalytic cracking unit..

PES said in its statement that there were three explosions at the refinery, which affected an alkylation unit.

A source familiar with plant operations said one explosion occurred at a 30,000 bpd alkylation unit that uses hydrofluoric acid (HF), one of the deadliest chemicals in the refining business and a source of controversy for its use to make high-octane gasoline at plants in densely populated areas.

City health officials said in the afternoon that there were no findings suggesting any dangers to the surrounding community, said Philadelphia Department of Public Health spokesman James Garrow in a statement. He said no HF was detected during monitoring outside of the refinery as well.

In the past, refinery workers have called for refineries to stop using hydrofluoric acid because of the harm it can do to the eyes, skin and lungs when released into the atmosphere following explosions.

The U.S. Chemical Safety Board, a non-regulatory federal agency that investigates such incidents, is sending a four-person team to look into the explosion. It has in the past advocated refineries stop using hydrofluoric acid in refining processes.

About 300,000 people live within three miles (5 km) of the Philadelphia refinery, according to a 2018 study by California’s South Coast Air Quality Management District, an air quality agency that oversees the Los Angeles area. That makes it the most densely populated area near a refinery that uses HF alkylation.

“I do everything I can to close my windows and keep this pollution out of my house. But when these fires happen it shows there really is nothing we can do to protect ourselves,” said Sonya Sanders, a member of Philly Thrive, a community organization that wants the refinery closed.

The incident comes after years of financial struggles for the refinery, which has slashed worker benefits and scaled back capital projects to save cash. It went through a bankruptcy process last year to reduce its debt.

Analysts said gasoline supply in the Northeast could be affected by the outage. Gasoline futures rose 4 percent on Friday on the news.