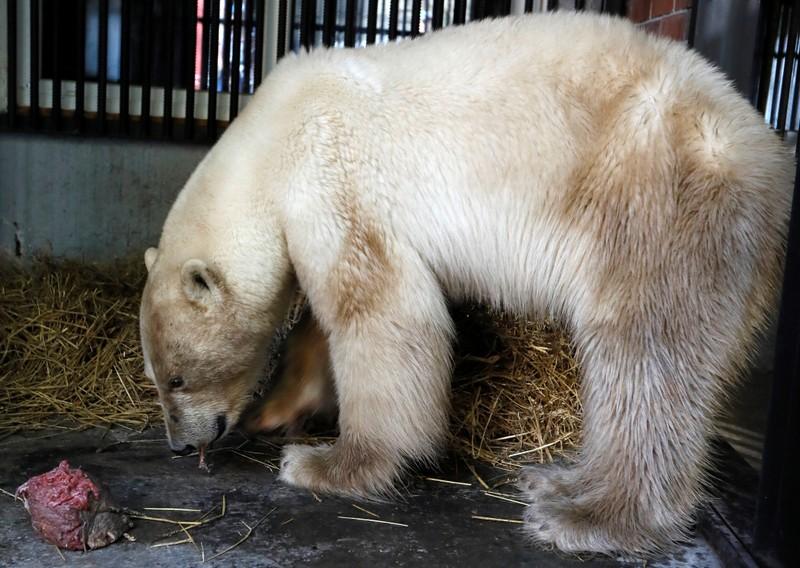 A female polar bear, which was found stray in the industrial city of Norilsk, eats meat inside a quarantine cage after arriving at the Royev Ruchey zoo in Krasnoyarsk, Russia June 21, 2019. REUTERS/Ilya Naymushin

MOSCOW (Reuters) – A famished polar bear picked up this week after it wandered lost into a northern Russian city hundreds of kilometers from its Arctic habitat was taken on Friday to a zoo in the Siberian city of Krasnoyarsk for treatment.

The two-year-old female polar had appeared, starving and exhausted, in the northern nickel-producing city of Norilsk on Sunday.

It then became ill and almost died after scavenging for food on a rubbish heap in Norilsk and urgently needed treatment, oil company Rosneft which works in the region said in a statement.

The company said it had taken part in the operation to transport the bear from Norilsk to Krasnoyarsk.

“The bear is receiving all necessary treatment and healthy food,” it said.

Climate change has been damaging polar bears’ sea-ice habitats and forced them to scavenge more for food on land, bringing them into contact with people and inhabited areas.

It was unclear how the animal had ended up in Norilsk but Oleg Krashevsky, a local wildlife expert who saw the polar bear in Norilsk, said it was possible it had simply got lost. He said the bear’s eyes were watery and that evidently it could not see well.

Krashevsky said it was unclear what would be done with the polar bear as it looked too weak to be taken back to its natural habitat.