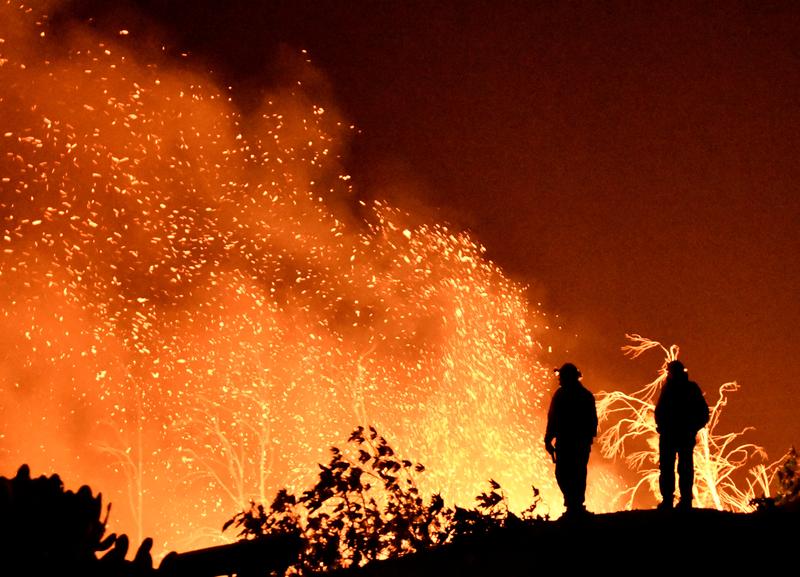 LOS ANGELES (Reuters) – California Governor Gavin Newsom has proposed helping utilities create a fund of up to $21 billion to compensate future victims of wildfires sparked by the companies’ equipment or employees, an aide said on Friday.

The proposal by the Democratic governor follows the bankruptcy filing earlier this year of San Francisco-based utility PG&E Corp, which anticipates $30 billion in liabilities from wildfires that have been blamed on its equipment, including the state’s deadliest blaze which killed more than 80 people last year.

Since 2000, California has endured 15 of the 20 most destructive wildfires in state history. Newsom has blamed climate change for much of the increased risk from fires.

“Wildfires don’t discriminate – they are a rural, suburban and urban danger,” Newsom said in a statement.

His plan is part of an effort by political leaders in the state to shore up the utilities, protect electricity rate payers and cut the risk of new fires.

Newsom has proposed the $21 billion fund to compensate wildfire victims in blazes tied to utilities, such as when a downed power line sparks a blaze. Half the fund would come from extending a surcharge on electricity bills and the other half would come from a new massive, utility-funded insurance policy, said an aide to the governor, who declined to be named.

The proposed fund would need to be created by the state legislature. The state could issue bonds to securitize over 15 years the portion of the fund underwritten by extending the rate hike, the aide added.

Utilities would have to spend a combined $3 billion on wildfire safety measures to qualify for aid from the fund.

If lawmakers approve the plan, Southern California Edison and San Diego Gas & Electric would have 15 days from the enactment of legislation creating the fund to choose whether to join it, the aide said.

Bankrupt PG&E would be allowed to participate in the $21 billion fund if the other two utilities elect to join, the aide said.

If the utilities elect not to join the $21 billion fund, the state would create a $10.5 billion liquidity fund, underwritten by the extension of the electricity surcharge, according to the aide.

The liquidity fund would provide fast compensation to victims in the aftermath of a wildfire, while a process is under way to determine a utility’s liability for the blaze, which can take years, the aide said.

California lawmakers are awaiting some details of the governor’s proposal, but they expect to hear them on Monday, state Senator Bill Dodd, a Democrat, said in a phone interview.

“Where I’m at right now is I want to work with the governor to get something comprehensive,” Dodd said.

Separately, Bloomberg reported that PG&E has been proposing a $14 billion fund to deal with past claims from wildfires. It also wants a $20 billion statewide fund for future fires, Bloomberg said.

“PG&E’s leadership is committed to continuing to work with the governor and all stakeholders on shared solutions that will compensate wildfire victims fairly and equitably and mitigate the ever-growing threat of wildlife risk,” the utility said in a statement.