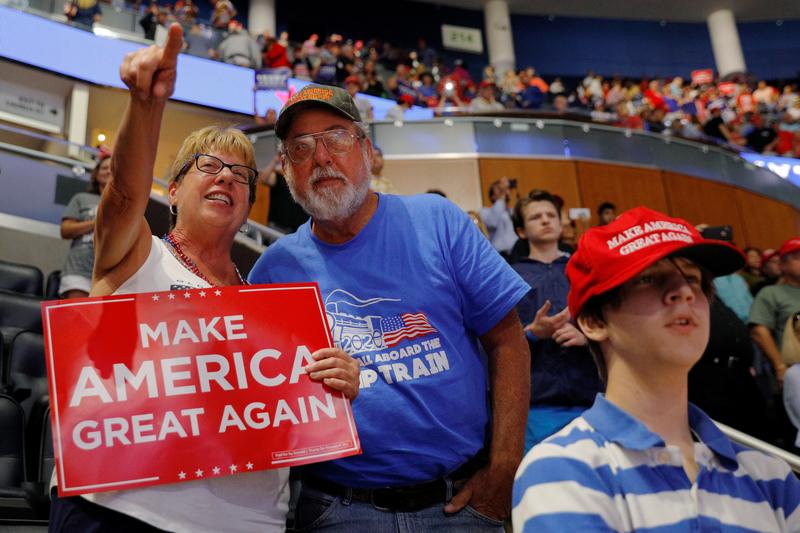 (Reuters) – A retiree worried about his granddaughter’s future in Pinellas County, Florida. A factory worker in Racine County, Wisconsin, who doubts politicians will improve her life as a single mother.

John Lenges, 65, a resident of Pinellas County, who changed parties to vote Republican in 2016, and his sister Jeanne Coffin talk at the conclusion of U.S. President Donald Trump’s re-election campaign kick off rally in Orlando, Florida, U.S., June 18, 2019. I’d like to give him at least another four years.” Before Trump announced his presidential bid, Lenges was a Democrat. He mostly tuned out politics and had never voted for a Republican president. “It was a wakeup call,” he said. “Our country needed a turn.” Lenges’ framed ticket to Trump’s inauguration hangs on a home office wall once dedicated to NASCAR. REUTERS/Brian Snyder

These voters live in some of the most competitive counties in America’s presidential battleground states, places set to play an outsized role in the 2020 presidential election. All four counties were decided by four percentage points or less in 2016 and ultimately won by Donald Trump.

Trump’s path to a second term will test an electoral map he realigned. He must hold the strong support of the white, working-class voters who helped him capture Florida and Pennsylvania.

He will aim to build on his narrow victory in Wisconsin, which saw a decline in turnout among predominately Democratic black voters. And he is fighting to keep the onetime Republican stronghold of Arizona in his column as population shifts have put the state in play for Democrats.

Reuters will report from four critical counties in these states through the election for a better understanding of the people and places defining the presidential race.

The series starts with the stories of four people whose voting decisions – often driven by personal experiences, they said, rather than by party affiliation – continue to upend politics as usual.

(For an interactive version of this story: tmsnrt.rs/2IrnBXR)

JOHN LENGES IN PINELLAS COUNTY, FLORIDA: “I’D LIKE TO GIVE HIM AT LEAST ANOTHER FOUR YEARS.”

Four years earlier, when Trump announced his presidential bid, Lenges was a Democrat. He mostly tuned out politics. He had never voted for a Republican president. Trump was different – a businessman and political outsider.

“It was a wakeup call,” said Lenges, 65, a retired maintenance supervisor. “Our country needed a turn.”

Lenges worries about his granddaughter’s future as he hears daily news reports of violence. He hates seeing the removal of statues honoring Confederate soldiers who fought in the U.S. Civil War, saying it trashes history.

Trump may not solve every problem, Lenges said, “but I think he’s a start.”

Friends called him crazy when he started waving handmade Trump signs around Pinellas County, where retirees, suburbanites and urban hipsters share sugar-sand beaches, and the electorate swings between the two major political parties in presidential contests.

He collects Trump memorabilia. His framed ticket to Trump’s inauguration hangs on a home office wall once dedicated to auto racing.

Lenges joined the Democratic Party when his father’s job as an assistant fire chief in Indiana depended on the party’s patronage. He remained loyal after moving to Florida and throughout his years raising his two sons to appreciate American eagles, motorcycles and the proper technique for skinning hogs.

To support Trump, Lenges became a Republican. He continues to root for the president’s agenda. On a recent vacation to the Grand Canyon, he added a day to visit the U.S.-Mexico border and the wall Trump has vowed to finish.

Posing for a photo, Lenges held a poster that read: “The silent majority stands with Trump.”

STACY BAUGH IN RACINE COUNTY, WISCONSIN: “IT’S GOING TO TAKE A LOT OF THOUGHT AND A LOT OF PERSUASION THIS TIME.”

Stacy Baugh would like a president attuned to the goals she sketched out in a planner in the three-bedroom apartment she shares with her cousin and their six children.

She wants job options. Ones that pay a wage she can live on, not the $13 per hour she has been earning on a hot factory line making air fresheners. She wants better schools for her children. She wants steady employment for their father despite his criminal record.

In 2016, she did not trust Trump or Democrat Hillary Clinton to deliver. So the 31-year-old Democrat skipped the presidential contest even as she cast her ballot in other races.

“Either one of them in office, there wouldn’t have been any change,” Baugh said. “So why?”

Baugh was part of an unexpected drop-off in Democratic votes in heavily African-American wards of Racine, the beleaguered Rust Best city where she is raising her four young children.

Black, bisexual and too often broke, she knows the statistics on discrimination that have some experts calling her region one of the nation’s worst for African-Americans. She has nightmares about her two sons ending up in a place like the youth prison built on a shuttered factory site near her home.

Baugh is behind on her rent. She is focused on paying her bills, interviewing for jobs, securing daycare. For now, she says, these priorities leave little time to parse the policy positions of two dozen Democrats vying to oppose Trump.

Looking for a career path, she plans to complete an information technology support program. She attended a jobs training boot camp promising decent pay at the Foxconn technology plant under construction nearby. Those jobs have not materialized, she says, leaving her to question Trump’s plan to revive American manufacturing.

Baugh cannot see herself supporting Trump in next year’s election, calling his language and actions “classless.”

An activist with get-out-the-vote groups that advocate for workers, she had more faith in politics when Barack Obama was elected America’s first black president. He disappointed her by not pardoning more non-violent offenders.

She feared worse from Clinton in 2016 given the harsh criminal sentencing law signed by her husband, former President Bill Clinton.

In 2020, she hopes to go door-to-door rallying votes for a Democrat she can believe in.

“I always go with the candidate who reaches me and touches me the most,” Baugh said. “But then nothing changes.”

KURT ZUHLKE IN NORTHAMPTON COUNTY, PENNSYLVANIA: “TRUMP LOOKS LIKE HE’S HOLDING HIS OWN.”

He gave Obama two chances to make good on his promise to bring hope and change to America. When neither reached Zuhlke’s small town in Pennsylvania, the businessman switched allegiances to Trump.

“I wanted to throw the wrench into the gears and make sure that everybody realized that something is really wrong in this country,” Zuhlke said.

He remains inclined to vote for Trump again, describing the 2020 Democratic candidates as “too old” or “too socialist.”

A Boy Scout leader, Zuhlke, 63, wishes the president would tone down his brash comments. But he gives Trump high marks for his willingness to upset the ways of Washington. He is pleased with Trump’s touch on a national economy seeing unemployment at 50-year lows. And he admires how Trump has executed his pledges to reduce industry regulations.

He wants to see people employed and making things again in Northampton County’s Slate Belt, a swath of white, working-class towns that never recovered from the demise of slate quarries and textile mills.

When Zuhlke moved here three decades ago, local Italian immigrant families welcomed him and his young family at their Sunday spaghetti dinners. “Everybody knew everybody and took care of everybody,” he said. “Not anymore.”

Zuhlke, a Republican, has come to view Washington politicians from both parties as “ambulance chasers” who have lost touch with his community. In 2016, he said, Clinton epitomized that conceit when she called Trump’s supporters an offensive “basket of deplorables.”

Zuhlke respects the value of hard work. At age 13, he started cutting lawns. As a young adult, he washed dishes and sold insurance. He quit college upon learning he made more money than his economics professor.

He built a family-owned company into a global supplier of produce containers. He employs nine people locally, and has no interest in getting too big to keep up his golf game.

A sign with Zuhlke’s name is taped to a bunk bed in the cabin for Boy Scout Troop 36, where he volunteers as a way to guide the next generation. He said he will keep voting for those who offer the strong representation his community needs.

“I can go either way,” Zuhlke said. “I wanted somebody in there that could shake things up.”

When he casts his first presidential ballot next year, Alexis Rodriguez will be thinking about his Mexican mother, who works two custodial shifts a day without a vote in the country she has called home for decades.

Rodriguez was too young to participate in 2016. Now 19, he came of age politically as Trump’s conservative presidency seemed to take aim at his identities as young, gay and Latino.

“It scares me to this day, just knowing that I may be under attack,” he said.

Rodriguez has never known a home beyond Phoenix, the diverse anchor of Maricopa County and population center of historically Republican Arizona. Democratic expectations for the state are rising alongside the new homes and condos remaking its desert landscape.

In 2016, Trump won Maricopa by the smallest margins of any Republican presidential candidate in years. Voters at the same time ousted their longtime sheriff, Joe Arpaio, whose anti-immigration rhetoric became a national platform for Trump.

Rodriguez, then in high school, joined classroom political discussions. He became an intern at Promise Arizona, a local nonprofit, where he helped immigrants apply for citizenship and voting rights.

Last year, he registered to vote as a Democrat, drawn to the party’s inclusive message, and cast his first ballot in the midterm congressional elections.

Emboldened by his “I voted” sticker, Rodriguez came home and rallied his older brothers to the polls, filling the household car with voters who had skipped the 2016 election. Their votes helped narrowly elect Kyrsten Sinema, a bisexual woman, as the first Arizona Democrat to win a U.S. Senate contest in three decades.

Rodriguez has now finished his freshman year studying social justice and human rights at Arizona State University, the first in his family to go to college.

On election night, he wants to watch the results arrive at home with his father, a Mexican-American veteran who shares his son’s enthusiasm for voting.

“We’re going to make sure that this country is for us,” he said. “Our voice matters.”