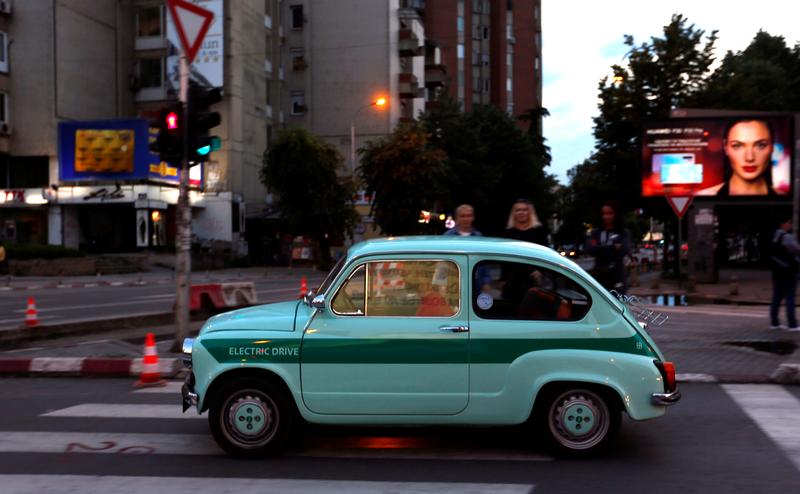 SKOPJE (Reuters) – In the North Macedonian capital Skopje, a small light blue car, reminiscent of bygone Communist times, silently zips through the streets in the first major attempt in the Balkan country to produce its own electric vehicle.

A converted supermini car Zastava 750, which has its combustion engine replaced with an electric one by BB Classic Cars, drives in Skopje, North Macedonia, May 29, 2019. REUTERS/Ognen Teofilovski

It is the brainchild of Skopje-based BB Classic Cars, a local company which restores vintage cars and now converts some of them to electric ones with help from a government innovation fund partly aimed at promoting greener technologies.

North Macedonia, which wants to join the European Union where tighter emissions rules are due to come into force in 2020, is battling major pollution mainly from car emissions and heating coal. It is planning to introduce subsidies for purchases of less polluting or zero emission cars.

BB Classic Cars converted the supermini Zastava 750, an upgraded license-built Fiat 600 popular across the now-defunct Yugoslavia, replacing its petrol engine with an electric one.

Milorad Kitanovski, director of the BB Classic Cars, said that the performance of converted Zastava 750s, originally manufactured in Serbia’s city of Kragujevac from the early 1960s until mid-1980s, is the same or better than the original.

“The engine has a far greater potential for a far greater performance and higher speed, but we limited it to 120 kilometers per hour,” Kitanovski said.

The converted cars are fitted with electric motors manufactured by Germany’s Kessler which also has a plant in North Macedonia. Kitanovski did not say how much the company invested to make the conversion.

The car has a range of 150 kilometers, while charging time is around three hours with a home charger, and only 15 minutes with rapid chargers.

“The cost of three hours of charging is less than 1 euro ($1.12), for the 10 kilowatts which is the battery capacity,” Kitanovski said.

In comparison, Porsche Macedonia offers Volkswagen’s e-UP! and e-Golf electric cars for 25,000 euros and 37,000 euros respectively, according to a February report by the country’s MIA news agency.