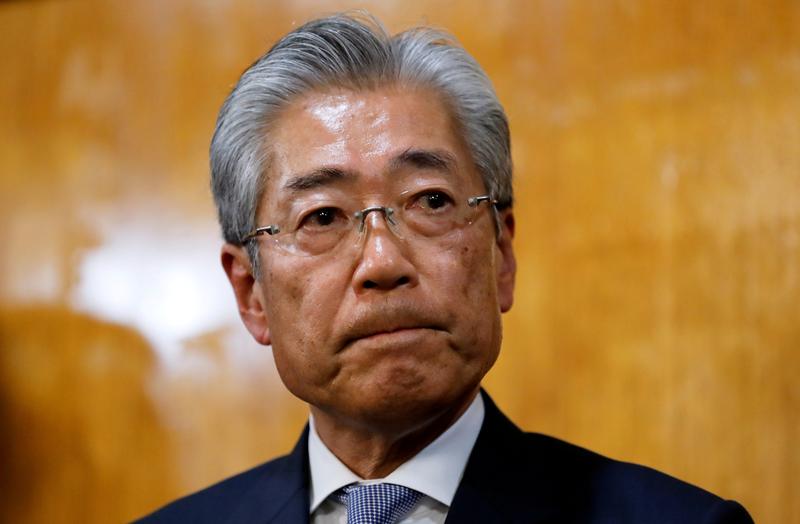 TOKYO (Reuters) – Surrounded by reporters in March, Tsunekazu Takeda, teary-eyed and blinking as cameras flashed around him, explained his decision to step down as Japan’s Olympics chief.

“I feel very bad that I’m causing a disturbance like this ahead of next year’s games in Tokyo,” he said. “I don’t believe I’ve done anything illegal.”

It was a spectacular fall from grace for the former Olympic equestrian, who served as the president of Japan’s Olympic committee for nearly two decades.

French prosecutors are investigating Takeda in the matter, although he has not formally been charged. He has denied wrongdoing, saying he believed the payments were for legitimate lobbying efforts.

“I did not personally have any involvement in the decision-making process,” Takeda said at a January news conference.

Takeda, who lives in Tokyo, declined to respond in specifics to questions Reuters posed in writing.

His lawyers, replying on his behalf, said that queries about Takeda’s past invaded his privacy and that many of the points raised by Reuters were “inaccurate” without providing details. The lawyers also said Takeda would no longer hold a public position after retiring from the JOC.

More than a dozen former business associates, family members, and acquaintances describe Takeda as mild-mannered and lacking business savvy. Some of them expressed surprise that he was being investigated in connection with Olympics corruption.

A panel appointed by the Japanese Olympic Committee (JOC) in 2016 cleared the bidding committee, which Takeda led, of bribery allegations. The International Olympic Committee (IOC) has also closed its own ethics case on the matter.

But some politicians in Japan say the issue of who was involved with the alleged bribery scheme remains unresolved.

“This isn’t over just because Takeda decided to step down,” said Yuichiro Tamaki, the leader of the opposition Democratic Party For the People, who questioned Takeda in parliament. “In my impression, he seemed to be just a figurehead.”

The soft-spoken Takeda, 71, is a household name in Japan. He is the great-grandchild of Emperor Meiji, but his family lost their royal titles after World War Two.

Takeda’s father, Tsuneyoshi, was an avid horse rider who also led the JOC. After university, Tsunekazu Takeda followed in his athletic footsteps, competing as an equestrian jumper in the 1972 and 1976 Olympics.

In 1994, Takeda helped establish the Royal Horse Riding Club in Tochigi, a rural area north of Tokyo, with Shimoren, a construction company, which paid for the project, four former board members of the company said. Takeda acted as an adviser but did not have a financial stake, one of them said.

Takeda, who was deeply involved in Japan’s equestrian federation, lent the venture an air of prestige, the former business partners said.

Hideki Yazawa, a Shimoren board member at the time, said Takeda advised the company to fill the club’s stables with expensive foreign horses, insisted that sand be imported from the United Kingdom and pushed for a VIP room for visiting dignitaries.

The club never attracted enough members to pay for the expensive fittings, Takeda’s former business associates said. After seven years, Shimoren declared bankruptcy and later sold the club, one of the former board members said.

Hisamitsu Yabe, one of the former Shimoren board members, said he did not blame Takeda.

“The bubble economy went bust and you couldn’t sell anything,” he said.

Takeda also ran a travel business called LTK Reiseburo Japan, which was started in 1979. The agency was merged into another company and re-formed as Setouchi LTK Travel in 2018, the company’s website showed.

Takeda was well-liked by the JOC staff. Three former staffers interviewed by Reuters use the word “gentleman” to describe him, a reference to both his aristocratic lineage and his temperament.

In 2012, Takeda was elected to be Japan’s representative to the IOC. A year later, he was onstage in Buenos Aires, making his final pitch for Tokyo to host the 2020 games.

“Tokyo can be trusted to be the safe pair of hands and much more,” he told IOC members.

Accusations of misconduct by people involved with the Olympic bid arose shortly after. A French investigation into doping by Russian athletes, including bribery to cover up the violations, turned up evidence that the Tokyo bidding committee had made two payments totaling $2.3 million to a little-known Singaporean firm called Black Tidings.

Black Tidings was a consulting business led by Tan Tong Han; the company stopped operating in 2014, according to a Singapore business filing. An independent panel commissioned by the JOC to investigate allegations of bribery said the Tokyo bidding committee hired Tan’s firm to provide consulting services.

Contacted by phone in Singapore, where he now owns a bakery, Tan declined to discuss his role in the Tokyo bid.

An independent commission for the World Anti-Doping Agency said in its 2016 report that a Black Tidings account in Tan’s name received a 300,000 euro refund in March 2014 meant for a Russian athlete whose positive drug tests were not concealed.

The report also said Tan was a close friend of Papa Massata Diack, son of Lamine Diack, a former IOC member from Senegal who served as the head of the International Association of Athletics Federations. As an example of the connection, the report said Tan named his son Massata.

According to a transcript, seen by Reuters, of Takeda’s cross examination by the French judge in charge of the inquiry, prosecutors are investigating whether Tokyo’s payments to Black Tidings were bribes to Lamine Diack, through his son, in exchange for influencing African members’ votes.

Both father and son were indicted in France on corruption charges related to covering up Russian athletes’ positive drug tests, including bribe-taking and money laundering, in May.

Tan was charged in 2018 with lying to a Singaporean investigator and sentenced to a week in prison in January 2019, according to the Corrupt Practices Investigation Bureau.

Papa Massata Diack did not respond to emails and messages from Reuters seeking comment.

Lamine Diack’s lawyer confirmed his client’s indictment, but declined to comment further. The Senegalese Olympic committee did not immediately respond to Reuters requests for comment.

French authorities placed Takeda under “formal investigation” as part of their corruption probe in December. In Japan, opposition lawmakers have urged a fresh investigation into Tokyo’s bid.

The JOC told Reuters it believed the Japanese investigation was independent and neutral, and that it did not plan to reopen its investigation. It said it is covering Takeda’s legal fees in the French investigation.

Takeda has kept a low profile in the past year.

One of the last major events he attended was in November at a gathering of hundreds of international Olympic delegates in a Tokyo hotel.

Prime Minister Shinzo Abe took the stage first. When it was Takeda’s turn, he was nowhere to be seen. He had mistakenly followed Abe offstage, forgetting he was the next speaker.

Additional reporting by Antoni Slodkowski and Chris Gallagher in TOKYO, Emmanuel Jarry in PARIS, and Aradhana Aravindan in SINGAPORE; Editing by Gerry Doyle