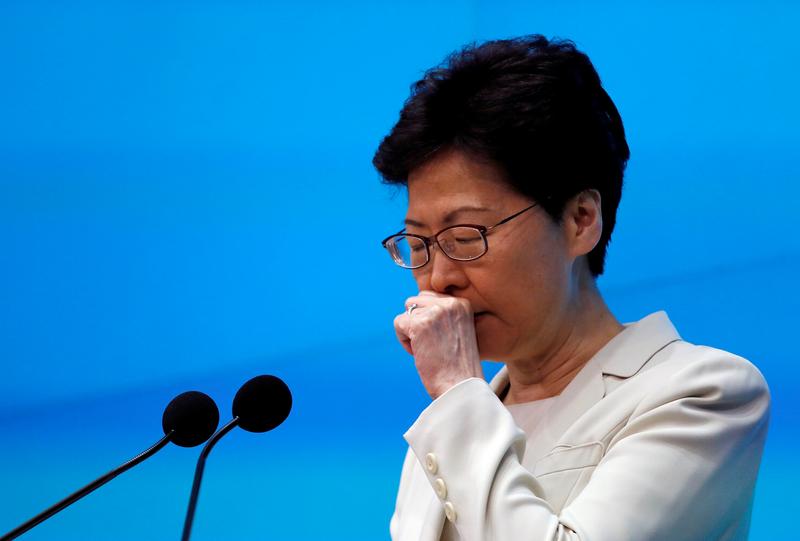 HONG KONG (Reuters) – When Carrie Lam was selected for Hong Kong’s top job two years ago, she pledged to “unite and move forward”, a sign she would balance the desires of the city’s free-wheeling citizens against the demand for control from the Communist Party in Beijing.

But as with all of Hong Kong’s leaders who took office after the former British colony reverted to Chinese rule in 1997, Lam has struggled to match her rhetoric with reality. She is clinging on to her job after mass protests in the financial hub in the past week against a controversial bill that would allow people to be sent to mainland China for trial.

The bill has been postponed but Lam’s position has become tenuous because of the embarrassment the shift has caused Beijing. A source with ties to the leadership in Beijing said officials there now had serious doubts about Lam’s capabilities.

The problem is there are precious few takers for her job.

Lam, a British-trained civil servant who has served in government for nearly four decades, is not as outwardly pro-Beijing as two of her predecessors, Tung Chee-Hwa and Leung Chun-ying.

But Tung stepped down mid-way through his second term, and Leung was prevented from running for a second term as restive citizens were angered by what they saw as Chinese encroachments on the city’s freedoms.

Donald Tsang, another predecessor, was sentenced last year to 12 months in jail on a charge that related to undeclared dealings with a business tycoon before his retirement in 2012.

One veteran Hong Kong official who has worked with Lam and her predecessors says they all enter office thinking they can keep Beijing’s authoritarian instincts in check while serving Hong Kong’s interests.

“They all have this idealistic thing, that I can do the best,” the senior official said. “But they are forever caught between the devil and deep blue sea.”

A government proposal for a direct election of the chief executive was voted down in 2014, making finding a replacement even more difficult.

Hong Kongers have rights including freedom of speech and assembly, yet the chief executive is elected by a committee of 1,200 largely pro-Beijing figures from business, politics and the wider community.

The extradition bill itself highlights the tensions between Hong Kong and the rest of the country – a legal amendment championed by Lam that allowed suspects, including foreigners, to be sent to mainland China for trial for the first time.

It also provided for mainland courts to issue orders to Hong Kong courts for locally-held assets to be seized and confiscated.

Hong Kong is ruled by an entirely separate and independent legal system that is part of British-based common law, the heart of the “one country, two systems” model adopted by the territory when it was handed back to China.

China’s legal system by contrast is completely controlled by the Communist Party, and riddled with forced confessions and arbitrary detentions.

When she announced an indefinite delay of the bill on Saturday, Lam insisted the legislation had been her idea, and was urgently needed to plug a legal loophole and to resolve a Hong Kong murder case in Taiwan.

But she also spoke to the tensions inherent in “one country, two systems” under the Basic Law, the mini-constitution that guides the city’s relationship with Beijing until 2047.

“They (the public) see the chief executive as a puppet of Beijing. That’s the major problem.”

Hyper-politicization and confrontation will continue, unless there are some reforms and space for the government to engage more with the pro-democracy opposition and bring them into consultative and advisory roles.

“This kind of political sandwich situation has worsened in the Xi Jinping era because the Xi Jinping government emphasizes national security, so Beijing has been tightening its policy toward Hong Kong,” Lo said.

Beyond ties with Beijing, any leader faces a host of other issues – eye-watering house prices beyond the reach of most people, a land shortage as well as a growing gap between the working poor and an entrenched rich elite.

With all the pressures, few potential candidates would admit to coveting the job despite its annual salary of around $640,000 and perks that include a colonial-era mansion in the heart of the city.

Foreign envoys say about only the thing in Lam’s favor at the moment is a lack of viable alternatives. But once Beijing is able to find a reliable successor who might be acceptable to a restive Hong Kong, her days will be numbered.

Running Hong Kong, a friend close to him said, “is the last thing he wants to do”.