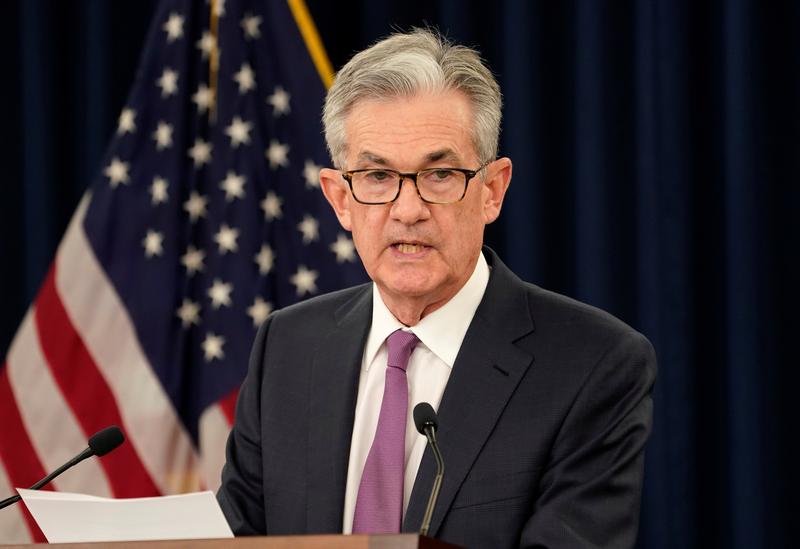 WASHINGTON (Reuters) – The U.S. Federal Reserve on Wednesday said it was ready to battle growing global and domestic economic risks with interest rate cuts beginning as early as next month, as it took stock of rising trade tensions and growing concerns about weak inflation.

Even as the U.S. central bank left its benchmark interest rate unchanged for now, the shift in sentiment since its last policy meeting was marked.

The bulk of Fed policymakers slashed their rate outlook for the rest of the year by roughly half a percentage point, and Fed Chairman Jerome Powell said others agree the case for lower rates is building; the Fed dropped its pledge to be “patient” before rate moves in a sign it was poised to act; and Powell stopped referring to weak inflation as “transient.”

Although economic growth is expected to continue, Powell said policymakers’ concerns congealed in the few weeks since the Fed last met in early May, with the unpredictable outcome of President Donald Trump’s trade dispute with China and other countries at the top of their minds.

Trump slapped new tariffs on China on May 5, took other steps that upended markets, and yet of late has sent hopeful signals of progress in the dispute when he meets Chinese officials next week – difficult terrain for the Fed to navigate.

The U.S. president has repeatedly accused Powell’s Fed of undermining his administration’s efforts to boost economic growth and has repeatedly demanded that rates be cut.

“Seven weeks ago we had a great jobs report and came out of the last meeting feeling that the economy and our policy was in a good place,” Powell said. “News about trade has been an important driver of sentiment in the interim.”

“We are quite mindful of the risks to the outlook and are prepared to move and use our tools as needed,” he said in a press conference following release of a policy statement in which the central bank said it “will act as appropriate to sustain” a nearly 10-year economic expansion.

Fresh economic projections released by the Fed show nearly half of the 17 policymakers now show a willingness to lower borrowing costs over the next six months, and seven see rates likely to warrant being lowered by a full half a percentage point – near what bond investors have anticipated.

Though the baseline economic outlook remains “favorable,” Powell said, risks continue to rise, including the drag that rising trade tensions may have on U.S. business investment and signs that economic growth is slowing overseas.

“Ultimately the question we are going to be asking ourselves is, ‘are these risks going to be continuing to weigh on the outlook?’” Powell said.

“We will act as needed, including promptly if that’s appropriate, and use our tools to sustain the expansion,” he said, adding that if the Fed does ease monetary policy by cutting rates, it may also halt a gradual slimming of its massive balance sheet.

Interest-rate futures surged in response to the dovish remarks, and traders are now betting heavily on three rate hikes by the end of the year. U.S. stocks turned higher, with the benchmark S&P 500 index up about 0.3% from the previous day’s close. In the Treasury market, expectations the U.S. central bank would be cutting rates before long drove the yield on 2-year notes, often a proxy for Fed policy, to the lowest in a year and a half at around 1.75%.

“I think the big surprise was how many folks moved into the cut camp on the Fed side. You had seven members that are now looking for two cuts in 2019,” said Jacob Oubina, senior U.S. economist at RBC Capital Markets.

“Maybe this goes to the point that the China trade situation is such a critical pivot for whether the Fed cuts or not.”

The new economic projections showed policymakers’ views of growth and unemployment were largely unchanged from March. But they now project headline inflation to be just 1.5% for the year, down from the previous projection of 1.8%.

They also expect to miss their 2% inflation target next year as well, a blow for a central bank that has missed that goal for years.

Policymakers “expressed concerns” about the pace of inflation’s return to 2%, Powell said. Wages are rising, he added, “but not at a pace that would provide much upward impetus” to inflation.

The long-run federal funds rate, a barometer for the state of the economy over the long term, was cut to 2.50% from 2.80%.

St. Louis Fed President James Bullard, who had argued that rates should be cut, dissented in Wednesday’s policy decision.