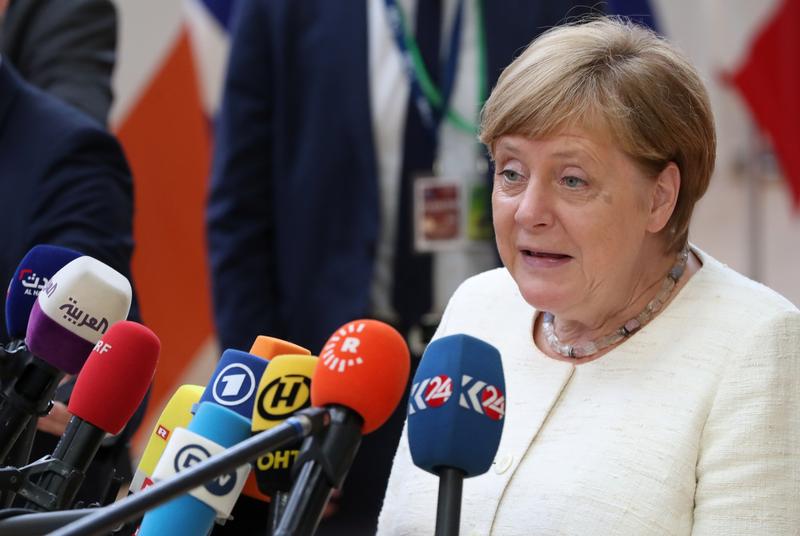 BRUSSELS (Reuters) – EU nations hoping to help lead the fight against global warming by agreeing to go carbon neutral by 2050 at a summit on Thursday engaged in last-ditch diplomacy to ease fears among central and eastern states that such a commitment could cost jobs.

Momentum has built swiftly around the goal with a majority of the bloc’s 28 members signing up to it in recent days, hoping to lead by example at U.N. climate talks in September that U.S. President Donald Trump has abandoned.

Chancellor Angela Merkel who, mindful of Germany’s powerful automotive sector, had long been hesitant to back the 2050 target, said on Thursday that doing so was her country’s goal.

But she stressed that would mean doing more right away to reduce greenhouse gases.

“I hope that the ambitious plans for climate protection become reality, which means all of us – or most of us – will have to do more,” she said.

Unanimity is needed for the bloc to endorse the goal at Thursday’s summit, but the leaders of Poland and the Czech Republic voiced their reluctance to back it on Thursday.

Prime Minister Mateusz Morawiecki said Warsaw could not agree to tougher targets for now “because there have to be very clearly formulated conditions for compensation mechanisms.”

Last-ditch changes to a summit draft text had helped to ease the skeptics’ concerns that without flexibility and funding their coal-fired economies would suffer from a steeper pace of emissions cuts, two diplomats from resistant nations said.

It softens language to a pledge to work toward “how to” ensure the transition to a bloc that absorbs as many emissions as it emits by mid-century, and calls on the European Investment Bank (EIB) to step up support for climate action.

It also says such efforts must preserve Europe’s competitiveness and account for vast difference in the continent’s economic and energy mix.

French President Emmanuel Macron, who in May launched the push along with eight other nations for the EU to agree the 2050 target, said the consensus in its favor was growing.

“More and more of countries are rallying behind this goal,” he said.

One EU diplomat whose country was reluctant to back the target said it would be difficult to stand alone against the tide.

The support underscores the growing political prominence of the fight against global warming.

An EU-wide endorsement of the mid-century target, backed by the EU’s climate chief and European Parliament, would allow the bloc to tighten its nearer-term pledge under the Paris climate accord to limit global warming to well below 2 degrees Celsius.

Although the EU is on track to the 2030 goal, climate campaigners say that is not enough to help avert the most extreme weather, rising sea levels and the loss of plant and animal species.

EU data shows the bloc would meet emissions cuts of 45% by 2030 if it fully implements targets on energy saving and renewable power use, on which some states are lagging. U.N. Secretary-General Antonio Guterres has called on the bloc to aim for a 55% cut.

However, even among nations in favor of going carbon neutral by 2050, doubts remain over how to pay for the economic shift to low-carbon technology in big employment sectors such as transport, farming and building and remain competitive.

To achieve net-zero emissions, the world’s largest economic bloc would have to invest an additional 175 to 290 billion euros per year in clean energy technology, according to an EU projection on climate pathways.

It would also likely entail tightening a cap in the EU’s Emission Trading System (ETS), which regulates emissions from industry.