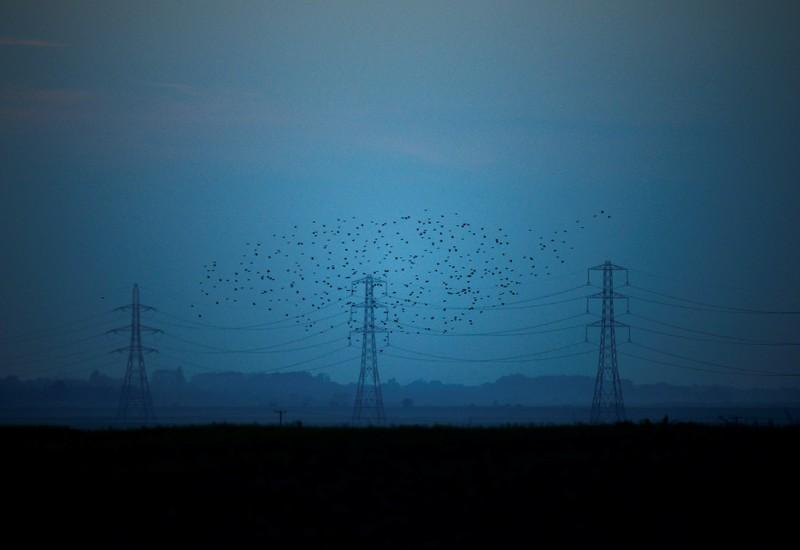 LONDON (Reuters) – Britain, the birth place of coal power, is set this year to use more electricity from zero-carbon sources such as wind, solar and nuclear than from fossil fuel plants for the first time, the country’s National Grid said on Friday.

FILE PHOTO: Migrating starlings fly at dusk past electricity pylons silhouetted by the sunset of a clear autumn evening in the Kent countryside, in Graveney, Britain, October 26, 2015. REUTERS/Dylan Martinez/File Photo

Britain was home to the world’s first coal-fuelled power plant in the 1880s, and coal was its dominant electricity source and a major economic driver for the next century.

But last week it became the first G7 country to commit to reach net-zero emissions by 2050, a target requiring a big increase in low-carbon power, and an even steeper reduction in fossil fuel use.

European leaders have also this week discussed moving to a tougher climate target but have struggled to find unanimity among member states.

“The incredible progress that Britain has made in the past 10 years means we can now say 2019 will be the year zero-carbon power beats fossil fuel fired generation for the first time,” National Grid CEO John Pettigrew said.

Data from National Grid shows low-carbon power generation contributed around 48% of Britain’s electricity in the first five months of 2019 while fossil fuels such as coal and gas-fired plants contributed around 47%. The rest comes from biomass and storage.

The transition has been largely due to a huge increase in Britain’s wind power capacity, with wind contributing almost a fifth of the country’s power in the first five months of 2019, up from just 1% in 2009.

Britain’s windy coastlines in particular have proved to be an ideal host for large wind projects, with the northwest coast of England home to the world’s largest offshore wind farm, Orsted’s Walney Extension.

The increase in zero-carbon power marks a huge shift from a decade ago when coal and gas plants provided around three-quarters of the country’s electricity.

Britain plans to phase out all coal-fired power generation by 2025 and further cuts in greenhouse emissions will be vital if the country is to meet the net-zero target, the government’s climate advisers have said.

Germany, which gets around 35% of its electricity from renewable sources has struggled to reduce its emissions due to its high portion of coal power, which contributed more than one-third of its power last year.

The National Grid data showed 9% of Britain’s electricity came from imports from Europe via interconnectors with France, Belgium, the Netherlands and Ireland during the first five months of the year.

More than half of these imports came from zero-carbon generation.

National Grid said the growing number of power interconnectors Britain has with its neighbors, such as nuclear power dominant France, will help Britain further curb its fossil fuel use.

The UK-Norway North Sea Link, at 720 km, is the world’s longest interconnector and is expected to begin operation in 2021.