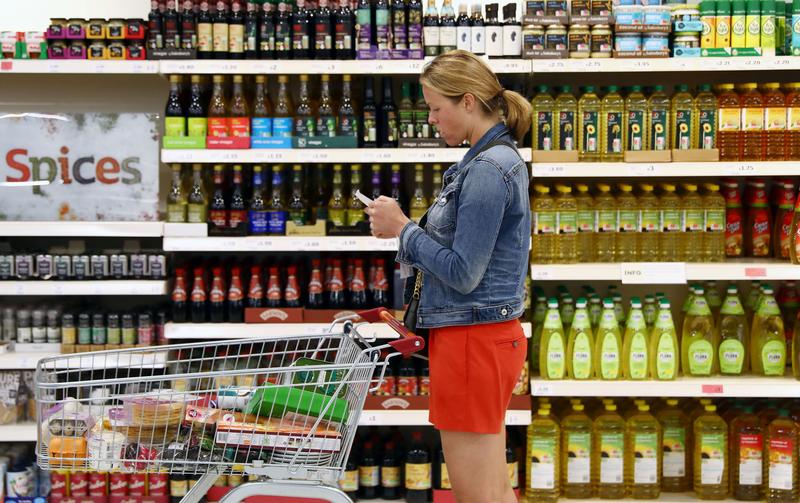 LONDON (Reuters) – Britain’s inflation rate cooled in May and cost pressures in factories fell to a three-year low, according to data that might reassure the Bank of England there is no urgency to pursue its stated policy of gradually raising interest rates.

FILE PHOTO: A shopper pushes a trolley in a supermarket in London, Britain April 11, 2017. REUTERS/Neil Hall

Unlike in the euro zone and United States, where waning inflation has spurred expectations for interest rate cuts, the British central bank has stuck to its view that rate hikes will be required at some point to prevent the economy overheating.

Britain’s Office for National Statistics said consumer prices rose at an annual rate of 2.0% in May after a 2.1% rise in April, matching the BoE’s target as well as the consensus in a Reuters poll of economists.

Sterling, which has fallen sharply in response to growing expectation that Prime Minister Theresa May’s successor will take a more hardline approach to Brexit, showed little reaction to the data.

“With inflation relatively subdued, and against a backdrop of heightened political and economic uncertainty, the case for raising interest rates anytime soon remains weak, despite recent warnings by some Monetary Policy Committee members,” the British Chambers of Commerce’s head of economics, Suren Thiru, said.

Stable inflation, combined with the lowest unemployment rate in 44 years and rising wages, has taken the edge off the uncertainty about Brexit for many households whose spending drives Britain’s economy.

Britain’s modest rate of underlying inflation is also helping the BoE to hold off on fresh interest rate hikes while it waits for the outcome of the Brexit impasse, although some officials in recent weeks have said increases may be needed sooner rather than later.

Core inflation, excluding energy, food, alcohol and tobacco, dropped to 1.7% in June, the lowest annual rate since January 2017 and as expected in the Reuters poll.

“Inflation eased in May, as travel prices such as air fares fell back after their Easter highs in April,” ONS statistician Mike Hardie said.

Britain’s inflation rate surged in 2017, pressured by the slump in sterling after the Brexit referendum in June 2016.

Britain’s on-target inflation differs from the euro zone’s where the European Central Bank has struggled to get inflation to match its target of just below 2%. ECB President Mario Draghi on Tuesday raised the prospect of further monetary stimulus to end the persistent undershoot.

Investors will also watch for signals that the U.S. Federal Reserve might plan to cut rates later this year — as markets expect and U.S. President Donald Trump has demanded — when it announces its policy statement at 1800 GMT.

By contrast, when the BoE announces its policy decision on Thursday the focus will be on policymakers’ enthusiasm for higher, not lower, rates.

Among manufacturers, the cost of raw materials — many of them imported — was 1.3% higher than in May 2018, slowing from 4.5% in April and marking the weakest increase since June 2016.

Economists polled by Reuters had expected input prices to rise by 0.8%.

Manufacturers increased the prices they charged by 1.8% last month compared with 2.1% in April, broadly in line with forecasts and the lowest rate since September 2016.

The ONS said house prices in April rose by an annual 1.4% across the United Kingdom as a whole compared with 1.6% in March. Prices in London alone fell 1.2%, the tenth consecutive fall.