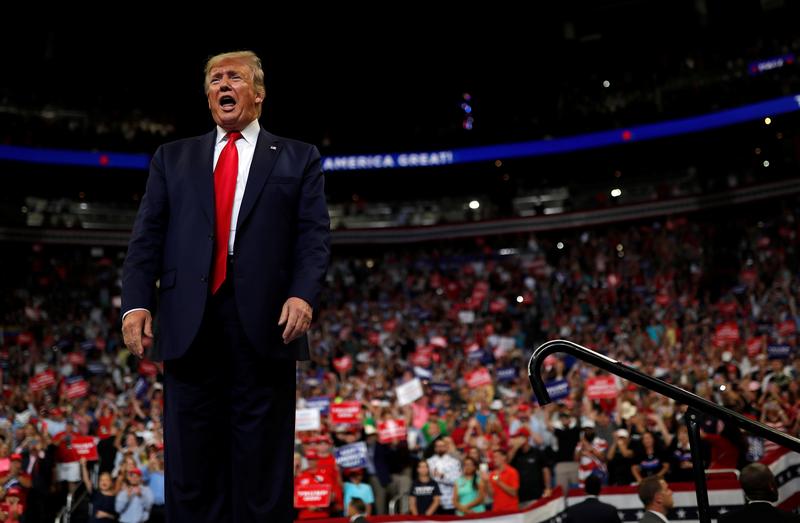 ORLANDO, Fla. (Reuters) – President Donald Trump formally launched his 2020 re-election campaign on Tuesday by presenting himself as the same political insurgent who shook up the Washington establishment four years ago and who is now a victim of an attempted ouster by Democrats.

At a packed rally in Orlando, Florida, Trump made clear he would run for re-election as an outsider, just as he did in 2016. Whether he can pull it off remains far from certain as Trump has been in Washington now for 2-1/2 years.

“Together we stared down a broken political establishment and we restored government by and for the people,” Trump said. “As long as you keep this team in place, we have a tremendous way to go. Our future has never looked brighter or sharper.”

As thousands cheered him on in Orlando’s Amway Center, Trump said his Democratic challengers would radically change the United States and would seek to legalize migrants coming across the southern border so they could vote and boost the Democratic political base.

It was a return to a major theme of his 2016 campaign when he warned of the threat of illegal immigration and promised a crackdown.

Trump said the Democrats “want to destroy our country as we know it” and that it’s “not going to happen.”

Two dozen Democrats are competing for their party’s nomination to face off against Trump in the November 2020 election. Many of the top Democrats lead Trump in opinion polls in many battleground states.

“Just think what this angry left-wing mob would do if they were in charge of this country. Imagine if we had a Democrat president and a Democrat Congress in 2020. They would shut down your free speech, use the power of the law to punish their opponents,” Trump said.

Trump made his re-election launch official at what was his 60th political rally since he took office in January 2017. He brought his wife, Melania, and a large contingent of senior White House staff.

“Tonight I stand before you to officially launch my campaign for a second term as president of the United States,” Trump said. “I promise you I will never ever let you down.”

The Trump of 2020 bears a strong resemblance to the Trump of 2016 – brash and eager to blast opponents and promote tough policies on trade and immigration.

During his speech, Trump declared himself a victim and aired his grievances.

He made an issue of Special Counsel Robert Mueller’s investigation into Russian interference in the 2016 election. The probe found insufficient evidence to establish that the Trump campaign engaged in a criminal conspiracy with Moscow. It also described numerous attempts by Trump to impede Mueller’s probe, but stopped short of declaring that he committed a crime.

“We went through the biggest witch hunt in political history,” said Trump. “It was all an illegal attempt to overturn the results of the election.”

Two-and-a-half years into his tenure, Trump sees plenty of positive factors, led by a growing economy with low unemployment.

“If the economy stays strong, he is very likely to get re-elected,” said Trump confidant Newt Gingrich, a former Republican speaker of the U.S. House of Representatives.

But the lingering aftermath of the Russia probe, coupled with a presidential style marked by name-calling and eye-popping tweets, has undermined some Americans’ confidence in Trump before the November 2020 election.

He also has stirred division with his hard-line policies on immigration and unsettled business and farm groups with his use of tariffs in trade disputes with China and some allies.

Democrats cite a string of broken promises in Trump’s first term, from lowering drug prices to closing corporate tax loopholes and stopping plant closures. In a media call on Tuesday, Democratic Party officials focused on his moves to weaken the signature healthcare law of his Democratic predecessor, Barack Obama, without providing an alternative.

“Donald Trump is launching his campaign for re-election tonight and the American people face a choice – we can make Trump an aberration or let him fundamentally and forever alter the character of this nation,” said Kate Bedingfield, deputy campaign manager for Democratic front-runner Joe Biden.

A Reuters/Ipsos poll on June 11 gave Trump a 40% job approval rating, compared with 57% who disapproved. Other opinion polls have shown him running consistently behind his main Democratic challengers, such as Biden, in key battleground states.

Republican strategists say the fundamentals favor Trump as he heads into his election but that he faces challenges given his bare-knuckled approach, which he refuses to temper.

“His support with his base is as strong as it’s ever been for any Republican incumbent president. The challenge is adding to that and building the coalition he needs for re-election,” said Republican strategist Ryan Williams, a former adviser to 2012 Republican nominee Mitt Romney.

In a Twitter post before his trip, Trump said: “Republican enthusiasm is at an all time high. Look what is going on in Orlando, Florida, right now!”

The Orlando Sentinel, however, welcomed the president’s visit with an editorial titled: “Our endorsement for president in 2020: Not Donald Trump.”

Trump supporters with tents and sleeping bags started camping out at the rally venue on Monday and thousands had gathered by Tuesday afternoon in a torrential downpour. “It was like a big Trump party,” said Maureen Bailey, who slept in a tent with her twin sister, Laureen Vartanian.

Reporting by Steve Holland; Additional reporting by Doina Chiacu in Washington and Carlo Allegri in Orlando; Editing by Bill Trott and Peter Cooney