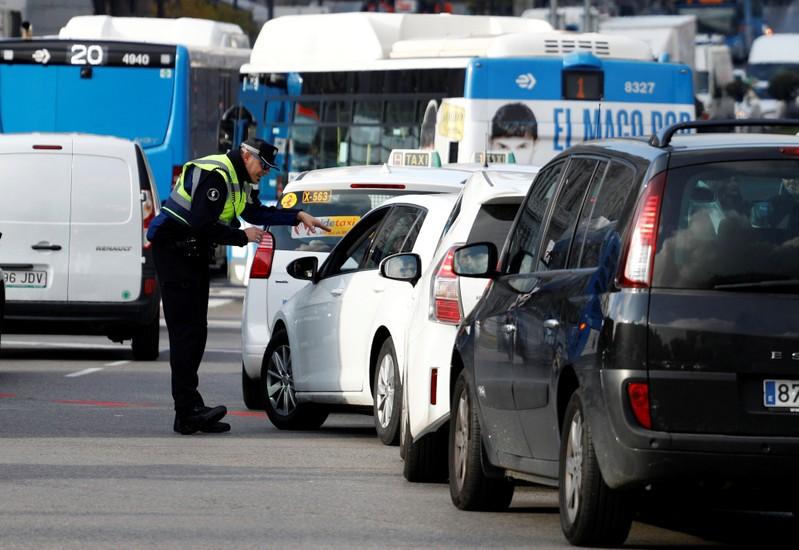 FILE PHOTO: A police traffic officer speaks to motorists entering the center on the first day of a city ordinance to ban certain vehicles without the proper sticker according to their emissions in Madrid, Spain, November 30, 2018. REUTERS/Paul Hanna

MADRID (Reuters) – Madrid’s new municipal government plans to suspend some anti-car emissions policies in the city center, drawing a warning from the European Commission that Spain might be sanctioned if it fails to meet air quality standards.

The municipality, controlled by the conservative People’s Party (PP), said on Monday that from July 1 it would suspend fines on cars entering a currently restricted area of around 5 sq km (2 sq miles), while it conducts a review of the policy.

The PP says the current restrictions have been too disruptive.

The policy, known as ‘Madrid central’, started last November when the city’s then far-left government banned most petrol and diesel cars from its center as a way to tackle high levels of nitrogen dioxide in Madrid, which had been in violation of European regulations since 2010.

Asked about the municipality’s roll-back plans, EU Climate chief Miguel Arias Canete said on Tuesday that it would be analyzed as part of Spain’s overall programs on air quality to see whether they are aligned with EU policy.

Canete – who before becoming a commissioner served as a minister in a Spanish PP government – said the European Commission had issued warnings in the past to Spanish cities that did not comply with air-quality limits, demanding corrections and launching potential violation procedures.

Spain’s acting Socialist government, which has put a focus on environmental policies, has criticized the suspension of Madrid’s restrictions.