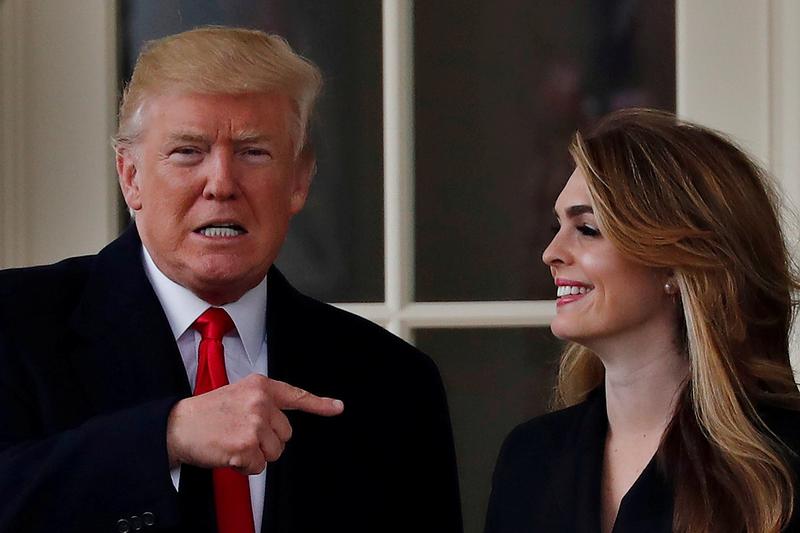 WASHINGTON (Reuters) – Hope Hicks, once a close aide and communications director for President Donald Trump, will become on Wednesday the first member of his inner circle to testify to the congressional panel leading a probe into possible obstruction of justice by Trump.

FILE PHOTO: U.S. President Donald Trump reacts as he stands next to former White House Communications Director Hope Hicks outside of the Oval Office as he departs the White House for a trip to Cleveland, Ohio, in Washington D.C., U.S., March 29, 2018. REUTERS/Carlos Barria/File Photo

Democrats who control the U.S. House of Representatives Judiciary Committee believe Hicks can provide important insights into five episodes of potential obstruction by Trump that were described in former Special Counsel Robert Mueller’s report on Russian meddling in the 2016 presidential election.

Hicks will be the committee’s “first fact witness,” said Jamie Raskin, a Democratic lawmaker on the committee, which is planning for a lengthy inquiry. “Having somebody talking about what happened from a personal perspective will be a dramatic debut for the committee,” Raskin said.

Hicks, who was part of Trump’s inner circle during the 2016 campaign and in the first 14 months of his presidency, was subpoenaed to testify and is due to appear at 9 a.m. EDT (1300 GMT) on Wednesday for a closed-door interview that aides said could run well into the evening.

The committee will afterward release a transcript of her testimony that is expected to feature prominently in a House Judiciary hearing on Thursday. At that time, lawmakers plan to examine an ABC News interview in which Trump said there would be nothing wrong with accepting damaging information on a U.S. political opponent from a foreign government.

Democrats see those comments as an invitation to foreigners to interfere in the 2020 campaign as Trump seeks re-election.

Mueller’s 448-page report concluded there was insufficient evidence to establish that the Trump campaign engaged in a criminal conspiracy with Moscow in 2016, despite extensive contacts between the campaign and Russia.

It is unclear how helpful Hicks, a 30-year-old public relations consultant, will be, given White House efforts to prevent former Trump aides from cooperating with a string of congressional investigations into Trump.

The White House is expected to have at least one lawyer in the room with Hicks on Wednesday. The administration has already directed her not to give the committee any documents pertaining to her White House tenure, which ended in March 2018. But she has handed over documents related to the 2016 campaign, raising expectations she will testify on those topics.

Hicks’ attorney did not respond to a Reuters request for comment.

The White House is asserting immunity from Hicks testifying before the committee on her time at the White House, according to a knowledgeable source. She is still expected to appear and answer questions, including ones about her time with the Trump campaign prior to the 2016 election.

Democrats want Hicks to discuss a June 9, 2016, meeting at Trump Tower in New York, where the Mueller report said campaign officials, including the president’s son Donald Trump Jr., met with Russians offering “dirt” on Democratic presidential candidate Hillary Clinton. A key question is whether Trump himself was aware of the meeting at the time.

The Mueller report described the president’s efforts to impede Mueller’s probe, but stopped short of declaring that he committed a crime.

The report recounts how in July 2017, Trump directed Hicks to issue a misleading statement to the press saying only that the Trump Tower meeting had been about Russian adoption.

“I would like to know about her involvement in that process and what she personally knew happened,” said Ted Lieu, a Democrat on the Judiciary Committee. “She was involved in that whole chain of events, where the president lied about what actually happened.”

Hicks was also present for two separate episodes that Mueller cited as offering relevant evidence of obstruction after Trump took office: his efforts to get Sessions to redirect the Russia probe away from his 2016 election campaign team, and his attempts to persuade McGahn to deny that Trump asked him to remove Mueller.

Lawmakers expect Hicks to decline to answer questions on key topics by citing Trump’s executive privilege over the Mueller report. At such points, aides said the committee would try to negotiate an agreement to allow testimony.

Experts said lawmakers could also seek a federal court order directing her to testify, an action the full House authorized in a party-line vote last week.

“It just seems like the Democrats are trying to influence the 2020 election and using the committees to do so,” said Debbie Lesko, a Republican on the panel.