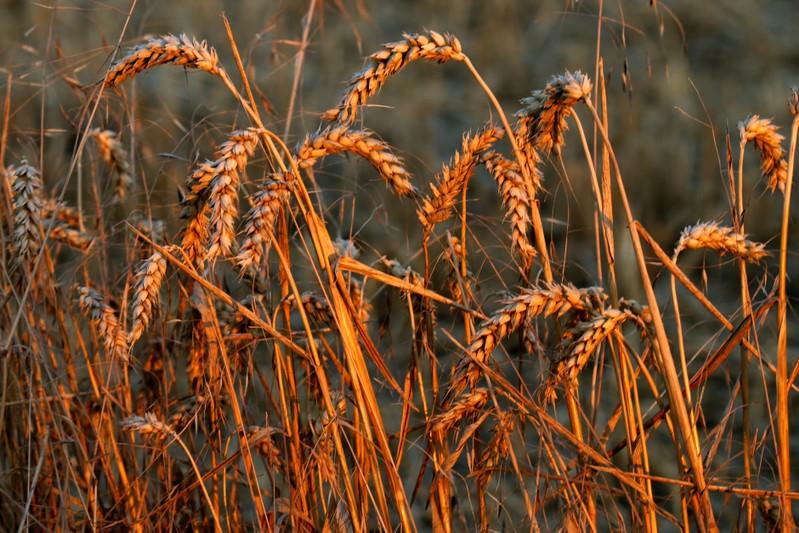 FILE PHOTO: Wheat is seen in a field during sunset, in Tilloy-Lez-Cambrai, France, August 3, 2018. REUTERS/Pascal Rossignol

A fall in the euro to a two-week low against the dollar lent some support but the export outlook for western European wheat in the upcoming season continued to be curbed by decent supply prospects in the Black Sea region.

The contract had climbed to a near two-week high of 183.75 euros on Monday in the wake of renewed strength in Chicago grain futures as rain threatened further disruption to corn planting and wheat harvesting.

Chicago prices then fell on Tuesday after a weekly government crop report showed corn planting was nonetheless nearing an end and wheat crop ratings were decent despite harvest delays.

In Europe, rainfall has generally improved crop conditions in the past month, with the notable exception of Spain.

The European Union’s crop monitoring service on Monday increased slightly its monthly forecast of the 2019 soft wheat yield in the EU to 6.10 tonnes per hectare, now 8.6% above last year’s drought-affected level.

In France, rising expectations for the volume of this summer’s harvest were curbing physical premiums, with traders increasingly seeing the soft wheat crop in a 38-39 million tonne range, well above 34 million last year.

“Given optimism about the size of the harvest, buyers are playing their part by pushing down premiums, but sellers aren’t reacting for the moment,” one cash broker said.

In Germany, recent rain has boosted volume prospects for the harvest, although a similarly good outlook in other countries in the Baltic Sea region was dampening German export sentiment.

“The fact we have to face is that Scandinavia, Poland, the Baltic States and of course Russia are also expecting excellent wheat harvests this summer and are making cheaper price offers to exporters.”

“It looks like Poland and Lithuania will make the early running in the export market as the new crop arrives this summer.”

Standard bread wheat with 12% protein for September onwards delivery in Hamburg was offered for sale at 3 euros under Paris December against 2 euros under on Monday. Buyers were seeking at least 4 euros under.

Reporting by Valerie Parent in Paris and Michael Hogan in Hamburg, writing by Gus Trompiz; editing by Emelia Sithole-Matarise