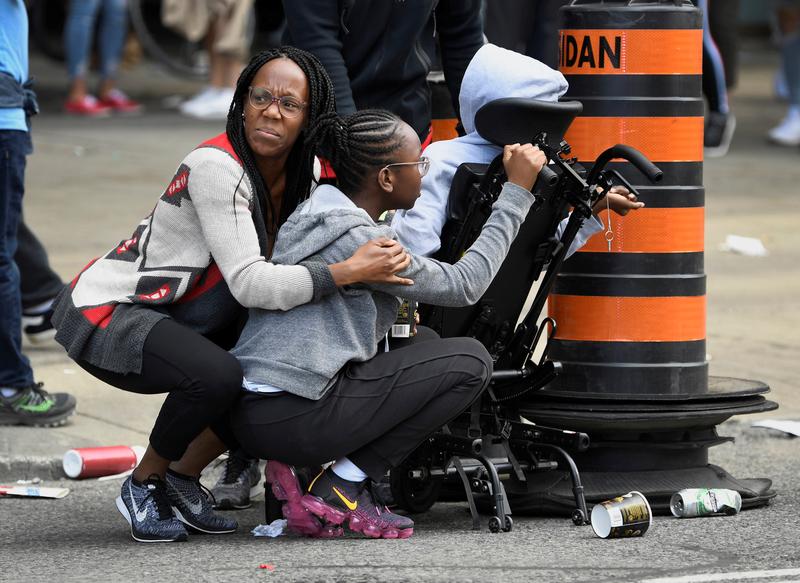 TORONTO (Reuters) – Canadian Prime Minister Justin Trudeau and some 2 million other fans cheered the NBA champion Toronto Raptors on Monday in a victory celebration that united the nation, but the party was marred by a shooting that seriously wounded two people.

Five double-decker buses that carried the players and their families moved along the parade route at a snail’s pace due to the massive crowd, as players including Kawhi Leonard, who was named most valuable player of the NBA Finals, sprayed champagne on the fans.

The Canadian musician Drake, one of the team’s most prominent and outspoken fans, earned a place on one of the buses.

The convoy arrived nearly two hours behind schedule near Toronto’s city hall, where the team was greeted on a stage by Trudeau and other dignitaries.

The shooting interrupted an otherwise peaceful, six-hour bash that only began to clear out in the late afternoon. Two people were taken to the hospital with non-life-threatening injuries, Toronto police said on Twitter. Two also were taken into custody and two firearms were recovered, police said. An investigation is ongoing.

The shots were fired near Nathan Phillips Square, the parade’s final destination, during the victory speeches, causing hundreds of people to scatter for cover. However, it caused only a brief pause in the celebrations.

Canadians from coast to coast and all the way up to the Arctic have been celebrating since the Toronto Raptors captured their first National Basketball Association championship in a country that is traditionally known for its love of ice hockey.

The Raptors clinched the best-of-seven series in Oakland, California, on Thursday in six games by beating the defending champion Golden State Warriors 114-110, giving rise to a nationwide love affair with basketball.

The Raptors victory is the first major professional sports championship for a Canada-based team since Major League Baseball’s Toronto Blue Jays won the World Series in 1993. Toronto has been waiting for its beloved Maple Leafs to win the NHL championship since its last Stanley Cup victory in 1967.

“It’s the culmination of playing for 24 years. We’ve been waiting a long time for this,” said Raptors fan Chris Rogers.

Rogers, 34, who has rooted for the Raptors since they entered the league 1995, was dressed in a jersey of Raptors guard Kyle Lowry. He had been waiting since morning to watch the parade.

Rogers said his workplace was fully supportive of him being out of the office as they believed the parade was important.

About 2 million fans stood by to celebrate and catch a glimpse of the winners, according to Maple Leaf Sports and Entertainment, which owns the Raptors.

Streets were closed off to accommodate the convoy, and three subway stations were also closed due to overcrowding on the street level. Enthusiastic fans festooned the streets of Toronto wearing Raptors red, purple, black and white.

A few fans climbed atop bus stops and the arches of Nathan Phillips Square, but were asked by police to come down.

As crowds swelled along the streets, several people were put on stretchers due to dehydration. Raptors’ dancers, security guards and the organizers were seen handing out water to the fans, who continued to throng streets leading up to the square.

The Snowbirds, an aerobatic flight demonstration team of the Royal Canadian Air Forces, contributed to the festivities by soaring over the skies of Toronto.

Toronto Mayor John Tory proclaimed June 17, 2019, as “We The North” day to mark the occasion, borrowing the slogan used by the Raptors.

“This championship is the culmination of years of patience, support, devotion and belief. Toronto has proven that it is a basketball city and that the game thrives in The North,” Tory said in a statement.