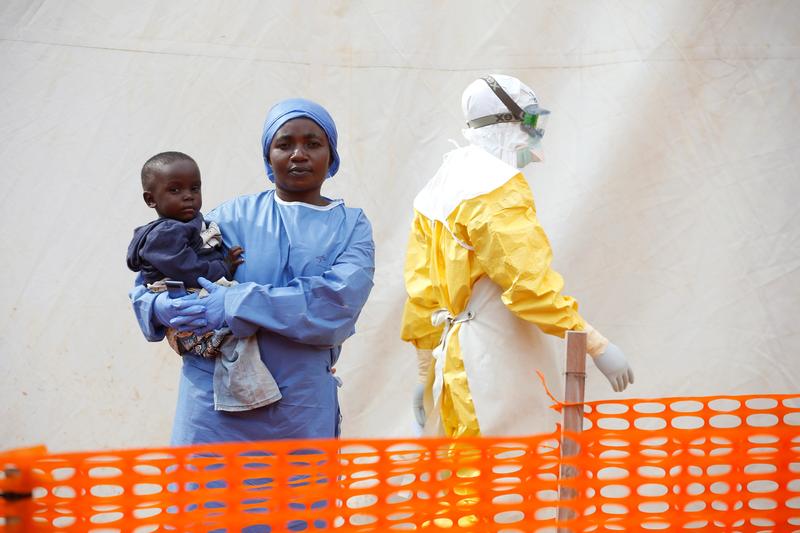 LONDON – The persistence of Congo’s Ebola outbreak and its deadly spread to Uganda in recent days show how societal issues are as crucial as scientific advances in controlling disease outbreaks, specialists in global public health say.

FILE PHOTO: Mwamini Kahindo, an Ebola survivor working as a caregiver to babies who are confirmed Ebola cases, holds an infant outside the red zone at the Ebola treatment centre in Butembo, Democratic Republic of Congo, March 25, 2019. REUTERS/Baz Ratner

Medical scientists, prompted by a devastating West African Ebola epidemic between 2013 and 2016, have worked fast to develop cutting edge vaccines, treatments and antibody-based therapies they hoped would prevent or halt future outbreaks of the virus. That includes an Ebola vaccine developed by Merck & Co Inc that proved more than 95 percent effective in clinical trials.

But the current Ebola outbreak has continued to spread relentlessly since it began in August 2018 in Democratic Republic Congo’s North Kivu province.

It has infected more than 2,000 people, killing at least 1,400 of them. And, in recent days, it reached Uganda, where several cases have been recorded, all in people who had come across the border from Congo.

Public health experts say this underscores the importance of factors beyond medicine – such as trust in authority, engagement and accurate information – in successfully controlling outbreaks of infectious diseases.

“Even in the presence of sensitive rapid testing, drugs and a vaccine, this Ebola outbreak has continued to burn on,” said Ian Mackay, a virologist and associate professor at the University of Queensland in Australia.

“The core drivers are all key human issues of trust, habits, fears and beliefs. That is the mix that now underpins the spread of any disease.”

Those seeking ways to end the Congo Ebola outbreak’s longevity and persistence say the issues it raises go to the heart of what public health means in the 21st century for countries across the world, rich and poor.

The World Health Organization cites mistrust of authorities in Congo, with attacks on healthcare workers and patients avoiding treatment centers, as major factor in the failure so far to contain the Ebola outbreak. Similarly, it cites anti-vaccine misinformation campaigns in the United States, Ukraine and elsewhere as allowing measles to spread furiously among people who are fearful and confused.

Jeremy Farrar, director of the Wellcome Trust medical charity and a specialist in global health, draws parallels between the challenge of containing Ebola in Congo and issues elsewhere, such as the surge of cholera in Yemen and the spread of measles in Ukraine, the United States and the Philippines.

The barriers are more social than scientific, he says.

“No public health can work without the support of the society it’s in. The science is clear in all of these things, but unless it has not just tacit support, but engaged support, then public health really struggles,” Farrar said.

A key factor has been greater international travel, and the increased information sharing that comes with it. That is “a double-edged sword”, says Daniel Bausch, director of the UK public health rapid support team and an expert on the Ebola virus.

While improved communication flows can help public health authorities track diseases and spread messages to people about how to protect themselves, greater access to a vast range of information can make the public become more skeptical of authority and can spread misinformation, including about vaccines, Bausch said.

“There is so much information flowing, it gets very difficult to pick out the truth. This is not unique to Ebola or Africa — it’s a global problem,” Bausch said.

Emmanuel André, a doctor and professor at Leuven University in Belgium who has been working with people in Congo affected by tuberculosis – another infectious disease – says the way to counter distrust is to engage with people directly affected by a disease or who have direct experience of a medicine to harness their experience.

“Medicine and public health have not yet learned how to deal with humility and mistakes,” he said.

“How can we ask trust from the people in the North Kivu when political authorities, United Nations agencies and international NGOs have jointly failed to provide primary services – including health? How can we ask them to expect that these same actors now would be able to provide a solution?”

A study André conducted in Congo in 2014-2016 found in the detection of tuberculosis – a disease that can spread widely if people with it don’t come forward for treatment – training volunteer screeners from local communities, mainly people who had themselves been treated for TB or had a family history of the disease, improved diagnosis rates and engagement.

“Building trust with the people is critical,” he said.