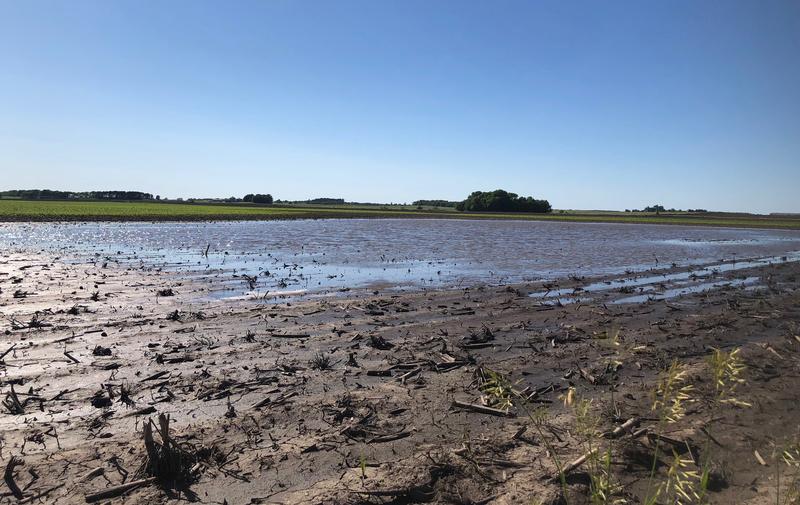 Dozens of corn farmers and those who sell them seed, chemicals and equipment gathered on Thursday at the restaurant in Deer Grove, Illinois, after heavy rains caused unprecedented delays in planting this year and contributed to record floods across the central United States.

The storms have left millions of acres unseeded in the $51 billion U.S. corn market and put crops that were planted late at a greater risk for damage from severe weather during the growing season. Together, the problems heap more pain on a farm sector that has suffered from years of low crop prices and a U.S.-China trade war that is slowing agricultural exports.

Forecasts for even more rain sent U.S. corn futures to a five-year high on Friday, though fewer farmers will benefit from soaring prices because of the planting disruptions.

James McCune, a farmer from Mineral, Illinois, was unable to plant 85% of his intended corn acres and wanted to commiserate with his fellow farmers by hosting the “Prevent Plant Party” at The Happy Spot. He invited them to swap stories while tucking in to fried chicken and a keg of beer in Deer Grove, a village of about 50 people located 120 miles (193 km) west of Chicago.

“Everybody’s so down in the dumps,” McCune said.

McCune returned his unused corn seed to a local dealer for Pioneer, a part of Corteva Inc, after planting just 900 acres of corn out of the 6,000 acres he intended to put in the ground.

Bureau County, Illinois, where McCune lives, has the fourth-highest risk of all U.S. counties for corn acres to go unplanted this year because of rains, behind three counties in Nebraska, according to Gro Intelligence.

Nationwide, farmers are expected to harvest the smallest corn crop in four years, according to the U.S. Department of Agriculture. The agency last week reduced its planting estimate by 3.2% from May and its yield estimate by 5.7%.

Farmers think more cuts are likely as the late-planted crop could face damage from hot summer weather and an autumn frost.

“An early frost will turn this world upside down,” Rock Katschnig, a farmer from Prophetstown, Illinois, said at the party.

Planting problems mean that growers need less seed and herbicides than expected, which is bad news for salesmen like Greg McKnight of Barman Seed in Woodhull, Illinois.

McKnight, who attended the party, said farmers returned Golden Harvest corn seed, made by ChemChina’s Syngenta. They are either seeking refunds on herbicides or asking Barman to hold their chemicals in storage until next year, he said.

McKnight also sells used 18-wheeler trucks to farmers to haul grain. He thinks financial uncertainty linked to the crop problems will slice his sales in half this year.

“Since all this rain began, it’s like shutting the light switch off,” McKnight said. “My phone has quit ringing on sales.”

The U.S. government announced a $16 billion aid package to help farmers hurt by reduced sales to China – but only those who manage to plant a crop are eligible for payments.

U.S. President Donald Trump also recently signed a $19 billion disaster relief bill that included more than $3 billion for expenses related to losses of crops, including those prevented from planting, according to the office of U.S. Senator Charles Grassley of Iowa.

Grassley said he added an amendment in the bill to include grains that are stored on farms in an indemnity program, after bins holding corn burst during floods in Iowa, Nebraska and Missouri.

Reduced plantings mean less business for grain elevators like Tettens Grain in Sterling, Illinois. Owner Dan Koster said at the party he may take in 60% to 75% of the 10 million bushels he handles in a typical year.

“We’re trying to figure out how to make it a break-even year,” Koster said.

Some farmers who were not able to plant as much as they expected took the unusual step of canceling contracts to sell corn to elevators after the harvest.

The planting problems are also bad news for equipment dealers like Ryan Raab, a salesman for A.C. McCartney, which sells machinery from AGCO Corp and other manufacturers. Farmers will not need to use their equipment as much because they did not plant as much, he said.

Mike Thacker, a farmer in Walnut, Illinois, planted about 1,600 acres of corn, or 60% of what he planned. He is reluctant to plant more because yields typically decline the later a crop is planted.

Thacker said corn that has started emerging from the ground is shorter than normal. He was not happy with even one field.

“It makes you feel terrible,” Thacker said at the party.

“This is our livelihood. We want to do a good job. We have not done a good job.”