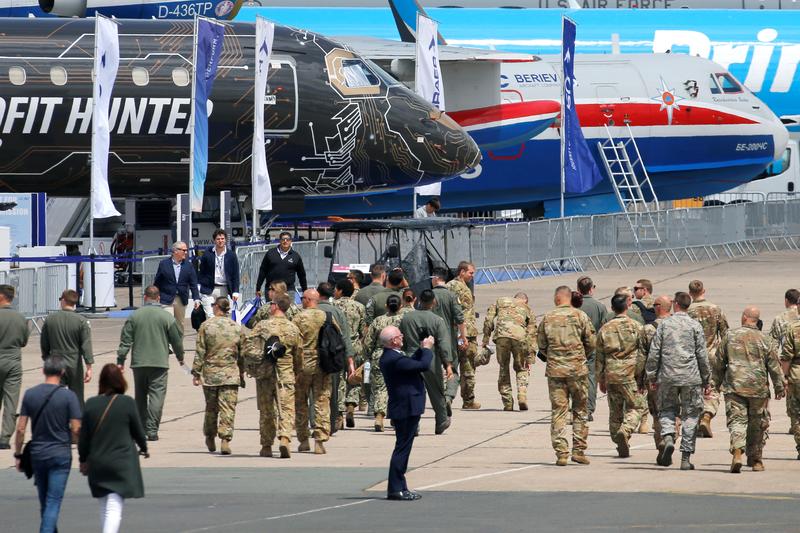 PARIS (Reuters) – Safety concerns, trade wars and growing security tensions in the Gulf are dampening spirits at the world’s largest planemakers as they arrive at this week’s Paris Airshow with little to celebrate despite bulging order books.

A man takes a picture of aircrafts on static display, at the eve of the opening of the 53rd International Paris Air Show at Le Bourget Airport near Paris, France, June 16 2019. REUTERS/Pascal Rossignol

The aerospace industry’s marquee event is a chance to take the pulse of the $150 billion a year commercial aircraft industry, which many analysts believe is entering a slowdown due to global pressures from trade tensions to flagging economies.

Humbled by the grounding of its 737 MAX in the wake of two fatal crashes, U.S. planemaker Boeing will be looking to reassure customers and suppliers about the plane’s future and allay criticism of its handling of the months-long crisis.

The grounding of the latest version of the world’s most-sold jet has rattled suppliers and even fazed rival Airbus, with the European company avoiding the traditional baiting of Boeing, while remaining distracted by its own corruption probe.

Aerospace executives on both sides of the Atlantic are concerned about the impact of the crisis on public confidence in air travel and the risk of a backlash that could drive a wedge between regulators and undermine the plane certification system.

Airlines that rushed to buy the fuel-efficient, longer-range MAX are taking a hit to profits since having to cancel thousands of flights following the worldwide grounding in March.

Even the planned launch of a new longer-range version of the successful A320neo jet family from Airbus, the A321XLR, is unlikely to lift the industry’s uncertainty, analysts said.

“If March and April are a sign of things to come, we’re looking at broader industry demand and capacity problems.”

“Net orders might be the lowest in years,” Aboulafia added.

Others dismiss fears of a downturn, citing the growth of the middle class in Asia and the need for airlines to buy new planes to meet environmental targets.

Airbus and Boeing are both looking at steps to make their aircraft more fuel efficient and reduce their carbon footprint amid a growing environmental protest movement in Europe.

“The only solution that the industry has is the newest most fuel-efficient aircraft,” John Plueger, Chief Executive of Air Lease Corp, told Reuters. “So that replacement cycle is going to continue.”

“We’re talking to so many airlines who still want more aircraft, and there’s really been no lessening of those discussions,” he said.

Boeing is delaying key decisions on the launch of a possible new aircraft, the mid-sized NMA, to give full attention to the 737 MAX and last-minute engine trouble on the forthcoming 777X, industry sources said.

But it could unveil a number of deals favoring widebody jets where it has the upper hand against Airbus, including at least a dozen 787 aircraft for Korean Air Lines.

Robert Stallard of Vertical Research Partners expects roughly 800 aircraft orders at the show, but noted it can be hard to tell which are truly new, firm business or old orders, or switched models. That compares with some 959 orders and commitments at the Farnborough Airshow last year.

Some analysts pegged the likely total closer to 400.

Although slowing, a multi-year boom in airline orders is still generating business for suppliers such as engine makers. French-American CFM International is set to announce a record order by units for over 600 engines from India’s IndiGo.

The June 17-23 show is not only about jetliner deals, but also a magnet for many of the world’s arms buyers who come to preview the latest war-fighting equipment, from anti-aircraft missiles to hotly-sought cyber war-fighting capabilities.

France and Germany will unveil a mock-up of a proposed new fighter jet and sign a framework agreement for its development which includes drones.

The deal, expected to close in the first half of 2020, would potentially upend the aerospace sector, creating a conglomerate spanning commercial aviation and defense procurement and putting pressure on several major suppliers such as Honeywell and General Electric.

Air show delegates are also watching a face-off between the United States and Iran in the Gulf. The United States blames Iran for attacks on two oil tankers in a vital shipping route that have raised fears of broader confrontation in the region.

In another political row with implications for arms firms attending the show, the United States has threatened to cancel Turkey’s participation in the Lockheed F-35 fighter jet program over Ankara’s purchase of a Russian radar system.

Watching the show attentively is China, whose own aerospace ambitions are growing at a time when U.S.-China trade tensions are rising ahead of a possible meeting between U.S. President Donald Trump and Chinese President Xi Jinping this month.