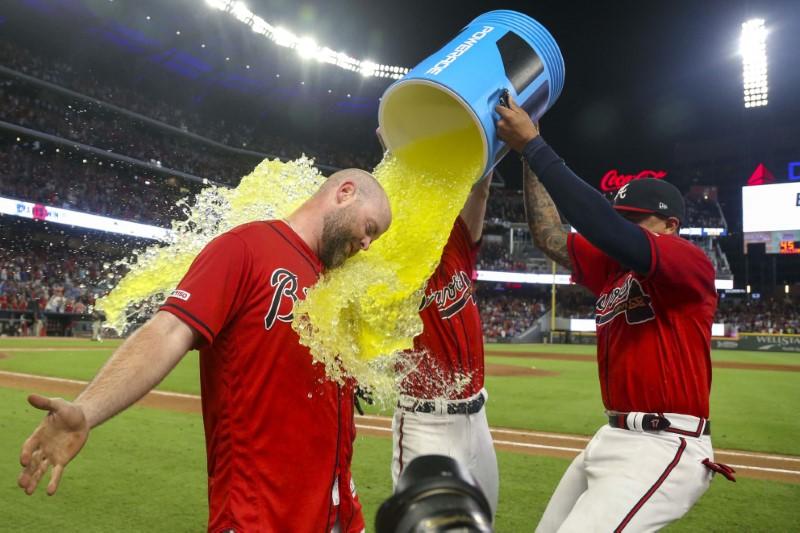 Hunter Renfroe highlighted a five-run 12th inning with his third home run of the game, and the San Diego Padres rallied from seven runs down to beat the Colorado Rockies 16-12 in Denver on Friday night.

Renfroe finished with four hits and five RBIs, Manny Machado homered and also had four hits, and Craig Stammen (5-3) got the win for the Padres in a game that lasted 5 hours, 4 minutes. Ian Desmond hit an inside-the-park home run, and Charlie Blackmon and David Dahl also went deep for the Rockies.

San Diego trailed 11-5 entering the ninth but sent 11 men to the plate to tie it. Renfroe hit his second homer of the night to cut it to 11-9, and Fernando Tatis Jr. tied it with a two-run single against Wade Davis.

San Diego put it away in the 12th. Tatis led off with a triple, Austin Allen and Machado had consecutive RBI doubles, and Renfroe hit a two-run homer off Jairo Diaz (1-1). Renfroe, who produced his second career three-homer game, has 21 homers for the season.

Brian McCann’s two-run single with two outs in the ninth inning gave him 1,000 RBIs for his career and completed a three-run rally to lift Atlanta over visiting Philadelphia.

The Braves trailed 8-6 entering the ninth inning against Philadelphia closer Hector Neris (1-3). He allowed a leadoff single to Dansby Swanson and walked Nick Markakis with two outs. Rookie Austin Riley knocked in the first run with a double to left field.

McCann worked the count to 2-2 and went down to get a splitter from Neris. McCann golfed the ball to left field for the game winner. Jerry Blevins (1-0) pitched a scoreless ninth and earned the win. The victory was the eighth straight for the Braves and their first in four tries against Philadelphia. Rhys Hoskins, Bryce Harper and Scott Kingery homered for the Phillies.

Scherzer (5-5) gave up three hits and had at least 10 strikeouts for the 87th time in his career. He passed Hall of Famers Bob Feller and Warren Spahn for 27th on the all-time strikeout list with 2,585. Carson Kelly hit a solo homer off Scherzer in the third and Nick Ahmed went deep in the fifth.

Tanner Rainey came on in the eighth for the Nationals to get the last out and keep the lead at 7-3 after Arizona scored one off Wander Suero. Closer Sean Doolittle pitched a scoreless ninth for Washington. Nick Ahmed and Carson Kelly homered for Arizona.

Alvarez homered with two outs in the fourth inning, his two-run blast extending the Houston lead to 10-0. The Astros scored multiple runs in each of the first four innings, tagging Toronto’s Aaron Sanchez (3-8) for eight runs on six hits and three walks over three innings.

Paul DeJong delivered a tiebreaking single in the top of the 10th inning as St. Louis finished a two-day comeback and beat host New York in the completion of a game suspended by rain Thursday night.

The game resumed at 6:10 p.m. ET Friday for the start of the bottom of the ninth after a “delay” of more than 17 hours. On Thursday, the Cardinals scored twice in a rainy top of the ninth off Mets closer Edwin Diaz to tie the score before play was suspended.

Diaz (1-4) remained in the game when play resumed Friday and suffered the loss. Carlos Martinez (1-0) threw a perfect bottom of the ninth, and Jordan Hicks earned his 14th save with a perfect 10th.

Dexter Fowler’s three-run homer snapped a tie in the eighth inning and capped a productive day for St. Louis, which earned its second win in a four-hour span by beating host New York.

Todd Frazier’s RBI single in the first gave the Mets a 1-0 lead. Two innings later, Matt Carpenter lofted a sacrifice fly to tie the score for the Cardinals, who went ahead 4-1 when Jose Martinez hit a pinch-hit, three-run homer in the fifth.

Steven Matz, who surrendered Martinez’s homer, got one run right back by leading off the bottom of the inning with his first homer of the season and the team-record fifth round-tripper of the year by a Mets pitcher. The Mets have lost three of four.

Rookie Eloy Jimenez hit a pair of three-run homers, Lucas Giolito became the first 10-game winner in the majors and Chicago reached the .500 mark for the first time in over two months with a victory over visiting New York.

Jimenez’s six RBIs were a career high. He connected off CC Sabathia (3-4) in the first inning and Luis Cessa in the sixth. He recorded his third multi-homer game and second against the Yankees. He also has five homers in his last six games.

Giolito (10-1) allowed a solo homer to Luke Voit four pitches into the game and little else, holding the Yankees to four hits in six-plus innings. He struck out six, walked four and threw 104 pitches.

Bauers’ cycle was the first by a Cleveland player since Rajai Davis on July 2, 2016. Bauers completed the feat with a two-run homer off Blaine Hardy in the eighth.

Brock Holt, Jackie Bradley Jr., Michael Chavis and Christian Vazquez also homered for Boston, which has won three straight. Martinez reached base five times, adding a single and two walks for the Red Sox, who led 2-1 before scoring four runs in the fourth inning and five in the fifth.

Trey Mancini had a homer and a single for the Orioles, who have lost three straight.

Mitch Garver hit a two-run homer in the eighth inning, and Kyle Gibson pitched eight shutout innings to lead Minnesota to a victory over Kansas City in Minneapolis.

Garver lined his 11th home run of the season 405 feet just over the center field fence off reliever Jake Diekman (0-4) with two outs in the eighth. It was the major-league-leading 133rd home run hit this season by the Twins.

Ji-Man Choi had two hits, including a two-run homer, and Tampa Bay rallied against Los Angeles’ bullpen to post a win in St. Petersburg, Fla.

Angels starter Andrew Heaney brought a one-hit shutout into the sixth inning, but was removed after giving up a leadoff double to Austin Meadows on his 99th pitch. The Rays then sent nine more batters to the plate off relievers Luis Garcia and Ty Buttrey (4-3), scoring five runs in the inning to take a 5-4 lead.

The Rays came in on a three-game losing streak, and the Angels had won three straight, all by the score of 5-3. Los Angeles has lost its past five attempts at getting back to .500.

Rougned Odor belted his fourth career grand slam in the fifth inning as visiting Texas recorded a victory over Cincinnati.

Elvis Andrus successfully stole home and Delino DeShields had a sacrifice fly and scored on a groundout for the Rangers, who have won 20 of their last 30 games.

Yasiel Puig recorded his second three-hit performance of the season for the Reds, who have lost seven of their past 10 games.

Playing against the team that drafted him, Colin Moran homered and drove in a career-high five runs to lead Pittsburgh to a win over host Miami.

The Pirates snapped a seven-game losing streak and tied a season high with 18 hits. Pirates left-hander Steven Brault (3-1) pitched six scoreless innings for his second consecutive quality start. He also went 2-for-2 at the plate with a double, single and a run scored.

Marlins starter Trevor Richards, who had been 3-1 with a 1.74 ERA in his previous five starts, took the loss. Richards (3-7) allowed 11 hits and five runs in five innings. He struck out one and didn’t walk a batter.

Omar Narvaez and Mallex Smith hit two-run homers for the Mariners, who improved to 4-3 on their nine-game road trip.

Rich Hill rallied from a slow start to pitch seven strong innings, and he also drove in the go-ahead run with a fourth-inning single as Los Angeles earned a victory over visiting Chicago.

Matt Beaty hit his first career home run and Justin Turner hit his 100th as the Dodgers earned their seventh consecutive home victory and won for the 11th time in their last 12 games at Dodger Stadium. They are 22-3 in home games going back to mid-April.

Kevin Pillar had three hits and drove in the tiebreaking run with a homer, and host San Francisco handed Milwaukee starter Zach Davies his first loss of the season.

The light-hitting Giants scored all of their runs via the long ball — a solo homer by Pillar and two-run smashes by Pablo Sandoval and Mike Yastrzemski — en route to their third consecutive victory.

Giants starter Drew Pomeranz (2-6) tossed five innings and allowed two runs, both unearned, in winning for the first time since April 24 at Toronto. Davies (7-1) gave up three runs on six hits, including the Sandoval and Pillar homers, in five innings.