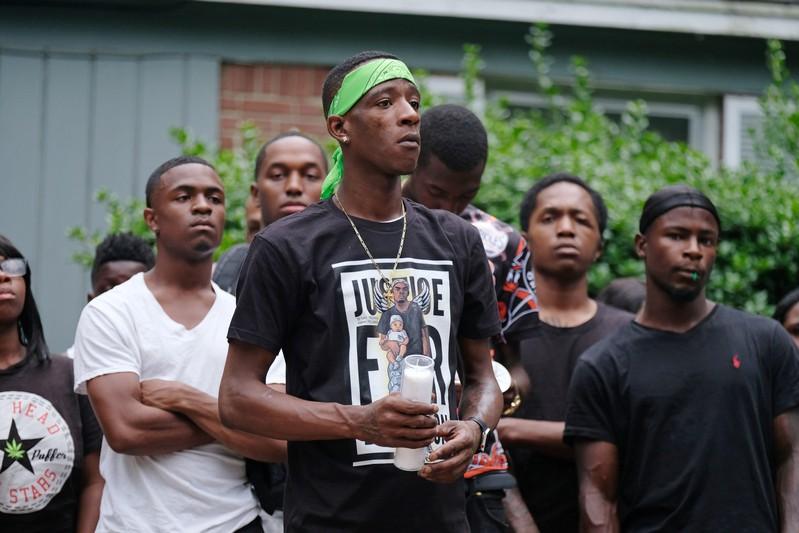 MEMPHIS, Tenn. (Reuters) – Some 300 people gathered on Friday evening for a candle-light vigil in the Memphis neighborhood where a young black man was shot dead by federal authorities as residents remained on edge following violent demonstrations earlier this week.

People take part in a candlelight vigil in memory of Brandon Webber, two days after he was shot dead by law enforcement officers, in Memphis, Tennessee, U.S., June 14, 2019. REUTERS/Ricardo Arduengo

Brandon Webber, a 20-year-old father of two, was shot and killed on Wednesday by U.S. Marshals seeking to arrest him on a warrant for aggravated assault and other charges, touching off clashes between police and protesters on the streets of Memphis that left 36 officers injured..

As darkness fell on Friday, family members of Webber gathered with supporters and family members clutching candles and green, black and white balloons. One woman, believed to be related to Webber, was seen leaving the gathering in tears.

Law enforcement appeared to keep their distance from the event, although a police helicopter hovered over the scene earlier in the day.

Thursday night passed quietly amid a heavy police presence in the predominantly black, working-class area of Frayser, but some locals feared there was more trouble brewing.

“It’s going to get worse,” said Darrel Johnson, an unemployed 26-year-old as he ate in a restaurant near where Webber was gunned down. “It’s going to be a tough weekend, but I really want it to be quiet and peaceful.”

Up the street from the shooting site, a few customers wandered in and out of the Sammen Food Market convenience store.

“I don’t think we are done,” said a 32-year-old hotel worker who gave his name as Michael, when asked if there would be more demonstrations to protest at Webber’s killing.

It was a different scene late Thursday, when scores of young black men gathered at sunset, sitting on and inside cars as rap music boomed from stereos and some drank beer, smoked cigarillos and talked about their frustration with law enforcement.

“The police need to come out here and show the people in the community that they are for us,” a local pastor, Kalvin Heard, said on Friday, wearing a T-shirt emblazoned with the name of his ministry, “Let’s Make God Great Again.”

Heard, 47, who said he once sold drugs and robbed victims in this neighborhood, was setting up a speaker system to preach and pray throughout the day.

“I choose life,” he said as he checked the generator in the back of his pick-up truck.