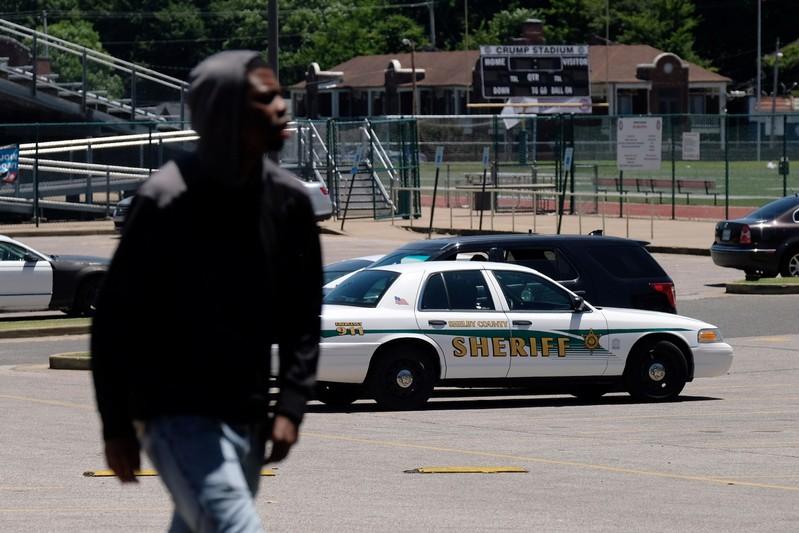 MEMPHIS, Tenn. (Reuters) – A young black man slain by federal agents as they tried to arrest him in Memphis, touching off violent protests, was wanted in the shooting of a man in Mississippi earlier this month, law enforcement officials said on Thursday.

At least two dozen police officers were injured on the streets of Memphis in demonstrations after Brandon Webber, 20, was killed on Wednesday night by members of a federal fugitive task force seeking to take him into custody.

In the aftermath of clashes between police and protesters, the district attorney for DeSoto County, Mississippi, where Webber was suspected of shooting a man to steal his car, on Thursday afternoon defended the actions of the federal marshals.

“I’m absolutely positive they did their job as they should have,” District Attorney John Champion told a news conference.

The marshals were seeking Webber on warrants stemming from the June 3 incident in Hernando, Mississippi, which is just south of Memphis.

Authorities in Mississippi said Webber was suspected of having shot a man five times point blank and leaving him for dead after going for a test drive in a car the victim was offering for sale.

A second suspect in the shooting remains at large.

Webber was shot after he rammed his car into vehicles driven by federal agents at about 7 p.m. on Wednesday in the working-class Memphis neighborhood of Frayser, according to the Tennessee Bureau of Investigation (TBI).

He was reportedly carrying a weapon when he got out of his vehicle, the bureau said, without elaborating. A later statement from the U.S. Marshals Service made no reference to a weapon and a spokesman declined to say whether Webber had one.

Webber had been arrested previously for possessing marijuana and drug paraphernalia, and driving with an expired or suspended license and an improperly displayed registration plate, public records show. It was not immediately clear if he was ever prosecuted.

The tensions in Memphis, where hundreds of protesters took to the streets overnight, evoked memories of a string of sometimes violent protests against police brutality that broke out in other cities in recent years.

A young man walks in front of a police patrol parked in front of a high school a day after violent clashes between police and protesters broke out on streets overnight in Memphis, Tennessee, U.S., June 13, 2019. REUTERS/Ricardo Arduengo

Those clashes, notably the many days of protests after an unarmed black man was killed in Ferguson, Missouri, in 2014, helped give rise to the Black Lives Matter movement.

As news of Webber’s death spread, several hundred people gathered, and some threw rocks and spat at the police, Mayor Jim Strickland said in a statement.

Police strapped on protective riot gear and tried to control the crowd by spraying chemicals, according to officials and media reports. Video footage of the protests showed one man bashing a police car with a chair. The mayor said multiple police cars were vandalized.

At least 24 officers and deputies were injured, with six hospitalized with mostly minor injuries, the mayor said. Two journalists also were injured. The injuries were mostly minor, police said, and the crowd eventually dispersed.

The tense scene raised the possibility of more disturbances in the predominantly black city.

Shortly before being shot, Webber posted a live video on Facebook that showed him in a car, rapping and apparently smoking marijuana.

In the video, he looked out the window and said he saw police. With a laugh, he looked directly into the camera and said what sounded like the officers would “have to kill me.”

Webber was the eldest of eight sons, his father, Sonny Webber, said in an interview on Thursday. He had two young children of his own, a 2-year-old boy and a newborn daughter, and was expecting a second daughter soon.

Sonny Webber said his son had sold marijuana but was not a drug dealer.

“He wasn’t a bad guy,” his father said. “He wasn’t even living long enough to be a bad guy.”

Leslie Earhart, a TBI spokeswoman, declined to identify the type of weapon Webber was reported to have had and whether Webber’s father and neighbors were correct when they said Webber had been shot between 16 and 20 times.