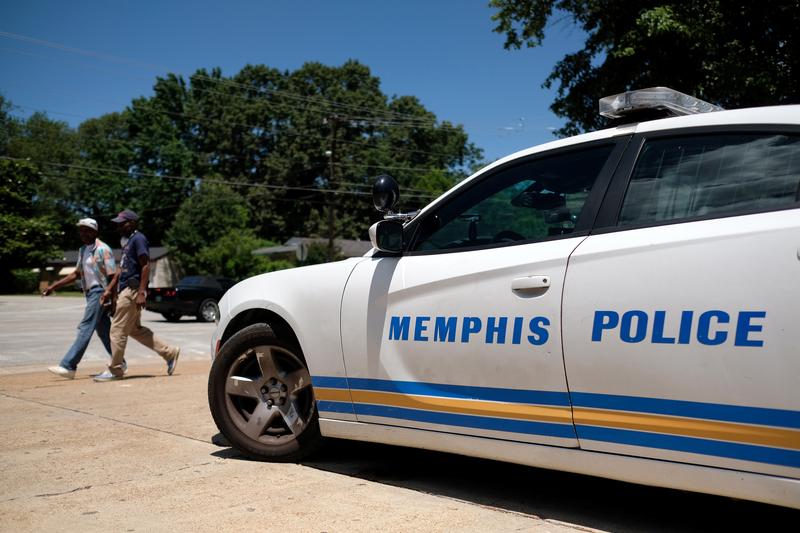 MEMPHIS, Tenn. (Reuters) – The Memphis community where a young black man was slain this week by federal agents as they tried to arrest him remained tense after a night of violent protests, but community activists and a mayoral candidate hoped the weekend would be calm.

Two men pass a police patrol car a day after Brandon Webber was shot dead by law enforcement officers, sparking violent clashes between police and protesters, in the community of Frayser on the north side of Memphis, Tennessee, U.S., June 13, 2019. REUTERS/Ricardo Arduengo – RC1839ADC2A0

The man shot, Brandon Weber, 20, was wanted in the shooting of a man in Mississippi earlier this month, law enforcement officials said on Thursday.

At least two dozen police officers were injured in street demonstrations on Wednesday night that erupted after Webber was killed by members of a federal fugitive task force seeking to take him into custody.

As darkness fell on Thursday, police helicopters flew over the area and squad cars patrolled the neighborhood.

Hunter Demster, a longtime Memphis resident and community activist, said he was on the scene of the shooting within an hour of it happening.

“I hate that this happened, both sides, the whole community, needs to take a long look at what they’re doing,” said Demster.

Demster, who is black, is a member of the Memphis Coalition of Concerned Citizens. He said the neighborhood’s reaction “didn’t happen in a vacuum” but is part of a continuum of friction with police.

Terrence Boyce, 30, who is running to be the next mayor of Memphis, a predominantly black city, said the community and the police “need to continue to figure out how we are going to bridge the gap between the police officers and the community.”

“I believe it can happen,” he added.

Boyce said he hoped all will be peaceful, but added, “You’re hearing from people who feel like they’re being heard.”

The tensions in Memphis, where hundreds of protesters took to the streets after Weber’s death, evoked memories of a string of sometimes violent protests against police brutality that broke out in other U.S. cities in recent years.

Those clashes, notably the many days of protests after an unarmed black man was killed in Ferguson, Missouri, in 2014, helped give rise to the Black Lives Matter movement.

Webber was shot after he rammed his car into vehicles driven by federal agents at about 7 p.m. on Wednesday in the working-class neighborhood of Frayser, according to the Tennessee Bureau of Investigation (TBI).

He was reportedly carrying a weapon when he got out of his vehicle, the bureau said, without elaborating.

The district attorney for DeSoto County, Mississippi, where Webber was suspected of shooting a man to steal his car, defended the federal marshals’ actions.

“This was a violent felon who did not obviously want to go to jail,” DeSoto County prosecutor John Champion told reporters on Thursday afternoon. “It’s obvious that he had no appreciation for the value of human life.”

Champion said Webber shot his victim five times point blank after the two men had taken the car on a test drive, then drove off in the stolen vehicle.

The victim, a resident of Hernando, remains hospitalized.