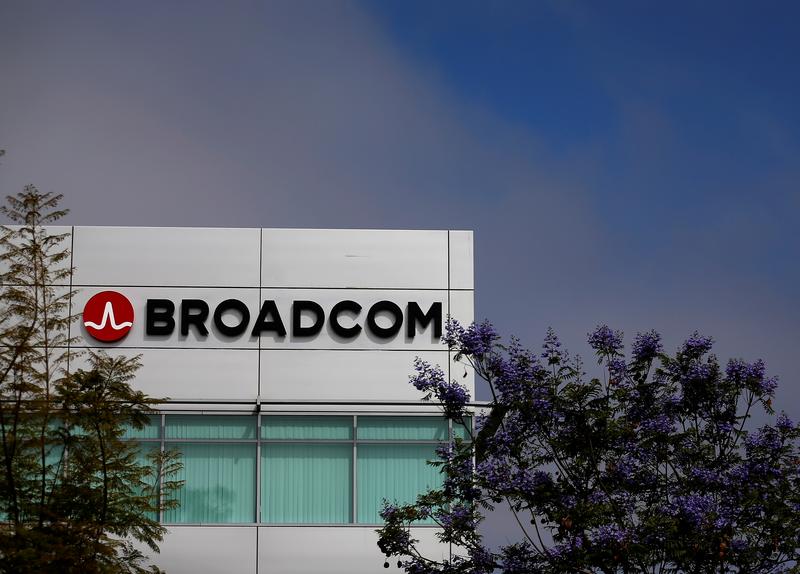 LONDON/BENGALURU (Reuters) – Broadcom Inc sent a shockwave through the global chipmaking industry on Friday with its forecast that U.S.-China trade tensions and the ban on doing business with Huawei Technologies would knock $2 billion off the company’s sales this year.

The forecast, included in the company’s second-quarter results late on Thursday, was the hardest evidence yet of the damage President Donald Trump’s trade war with Beijing may do to the global industry.

Shares in Broadcom fell as much as 8.6%, wiping more than $9 billion off the market value of the company, previously based in Asia but now with its headquarters and main listing in the United States.

U.S. chipmakers Qualcomm, Applied Materials Inc, Intel Corp, Advanced Micro Devices Inc and Xilinx Inc were all down between 1.5% and 3%.

The Philadelphia chip index was down nearly 3% with 29 of its 30 components trading lower. Shares of other Huawei suppliers like Analog Devices Inc, Skyworks Solutions and Qorvo Inc also fell.

“We’ll see a very sharp impact simply because (there are) no purchases allowed and there’s no obvious substitution in place,” Chief Executive Officer Hock Tan said on a post-earnings call with analysts on the Huawei ban.

Huawei accounted for about $900 million, or 4%, of the company’s overall sales last year. Broadcom, however, also said the forecast cut “extends beyond one particular customer.”

“We’re talking about uncertainty in our marketplace, uncertainty because of the – of demand in the form of order reduction as the supply chain out there constricts – compress, so to speak,” Tan said.

The semiconductor industry has been grappling with slowing demand since the second half of 2018 with bellwether Texas Instruments warning in April that a cyclical downturn could last for another two years.

That has related chiefly to signs that mobile phone markets in some major economies are increasingly saturated while mass demand in new areas like self-driving cars and internet of things devices for homes and offices is still developing.

The geopolitical risks from the trade conflict and Huawei ban are an additional shock.

“It’s not just Huawei, it’s deeper than that. OEMs [carmakers] aren’t ordering. Inventory concerns, which were supposed to ease, have not gone away,” said one European trader. “Goodbye H2 recovery hopes!”

Broadcom, known for communications chips that power Wi-Fi, Bluetooth and GPS connectivity in smartphones, is also a major supplier to Apple Inc and shares of the iPhone maker were down 1%.

“We believe Broadcom’s 2H19 outlook is not only impacted by the direct Huawei export ban, but also includes the indirect impact from the Huawei export ban to other customers as well as the possible industry-wide impact of the possible additional import tariffs,” Summit Insights Group analyst Kinngai Chan said.

The CEO of chipmaker Micron Technology also said the ban on Huawei brings uncertainty and disturbance to the semiconductor industry.

Micron will report its third-quarter results on June 25.

“I think you have seen all the companies (Qorvo, Skyworks, Maxlinear, Cree, Inphi, Lumentum, NeoPhotonics) which pre-announced negative for about half their quarter’s impact due to this Huawei export ban,” Chan said.

“The issue now is that there will be a second degree (indirect) impact as well that most companies do not want to talk about. We believe the next wave of companies that should be echoing what Broadcom says are Micron and Western Digital,” Chan added.”