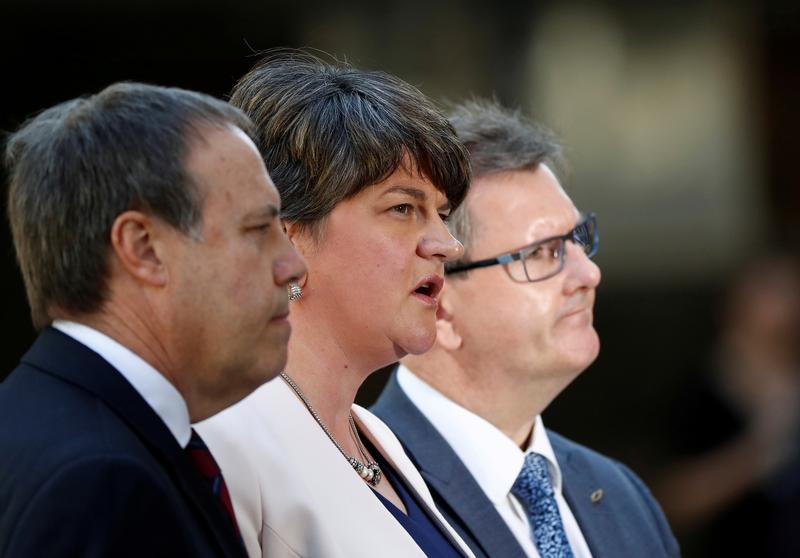 DUBLIN (Reuters) – The Northern Irish party propping up Britain’s minority government is not asking for changes to the Brexit divorce deal that will “fundamentally undermine” what has been proposed, one of its senior lawmakers said on Thursday.

How to manage the land border between EU-member Ireland and British-run Northern Ireland – including an emergency “backstop” solution to prevent the return of extensive frontier controls – has proven the most contentious element of Britain’s planned exit from the European Union.

While many of his Democratic Unionist Party (DUP) colleagues have insisted the backstop be removed completely from the deal, Jeffrey Donaldson said the party’s clear position is that the border insurance mechanism is changed in such a way that it can win the support of pro-British unionists in Northern Ireland.

However Donaldson’s preferred solution of inserting a clause allowing Britain to either exit the backstop after a certain number of years, or of its own volition, has long been rejected by Ireland and the EU, who argue it would effectively mean that it is no longer a backstop at all.

“It doesn’t need to be something earth-shattering. We’re not asking for something that will fundamentally undermine what has been proposed,” Donaldson said in unscripted remarks at a Dublin-based think tank.

The backstop is meant to keep the border open pending a future trade deal between Britain and the EU, and in keeping with the 1998 Good Friday peace deal that ended sectarian conflict between pro-British unionists and Irish nationalists.

Donaldson said attaching a time limit would incentivise both sides to strike a trade deal that would keep the border open.

Unionists have opposed the backstop as it stands for fear it could “trap” Northern Ireland within the EU’s orbit indefinitely.

Several candidates vying to replace British Prime Minister Theresa May have zeroed in on the backstop in pledging to renegotiate the withdrawal agreement she struck with the EU, only for it to suffer three crushing defeats in parliament.

Donaldson said frontrunner Boris Johnson and most leadership contenders are clear that the backstop is the main problem and that the DUP had engaged with a number of them, seeking assurances that their concerns would be addressed.

The EU have repeated that the stalled deal – including the backstop – will not change with the arrival of a new prime minister. Ireland’s prime minister warned British lawmakers this week against making “a terrible political miscalculation” of thinking a better deal was in the offing.

Donaldson shot back that if Dublin continued to “ignore the reality” that many unionists in Northern Ireland reject the backstop, is will drive all sides towards a “no deal” Brexit – in which Britain leaves the EU without legal arrangements to smooth the transition.

“Our door is open, I have come here today with a very clear message from the DUP: We want to engage, we want to resolve this, we want to find a way forward that works for both parts of this (Irish) island,” he said.