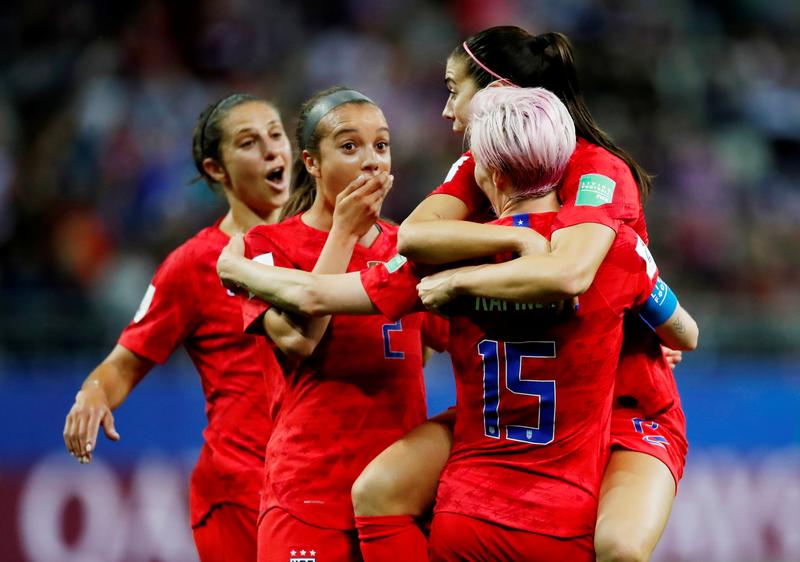 (Reuters) – The United States’ record 13-0 drubbing of Thailand at the Women’s World Cup on Tuesday did not sit well with everybody, with opinion divided on whether the team should have so mercilessly punished a hapless opponent.

Striker Alex Morgan scored five times as the holders began their World Cup campaign with the largest margin of victory in either the men’s or women’s World Cup.

“Celebrating goals (like #9) leaves a sour taste in my mouth like many of you. Curious to see if anyone apologizes for this postgame,” Twellman tweeted to his 327,000 followers.

He was also critical of the U.S. women for showing their hand ahead of games against more formidable opponents.

“Not sure why the #USWNT is ‘wasting’ any of their set plays when the score is 3-0. Bury (Thailand) then move on but don’t use anything that could be needed in future games,” he wrote.

“For all that have issue with many goals: for some players this is there first World Cup goal, and they should be excited,” the scorer of a record 184 international goals tweeted to her 679,000 followers.

She also questioned whether there was an element of sexism in the criticism.

“Imagine it being you out there,” she added.

“This is your dream of playing and then scoring in a World Cup. Celebrate. Would you tell a men’s team to not score or celebrate?”

“This got humiliating at some point. It just became an exercise in target practice,” he said. “You know what I wanted to do? Pull it back, knock it around.”

Former U.S. international Alexi Lalas, another member of the panel, however, defended the Americans.

“It’s not their problem they’re playing against a poor team,” he said.

“The U.S. team each and every time the whistle blows is going to score as many goals as possible.”

Reporting by Andrew Both in Cary, North Carolina; Editing by Greg Stutchbury