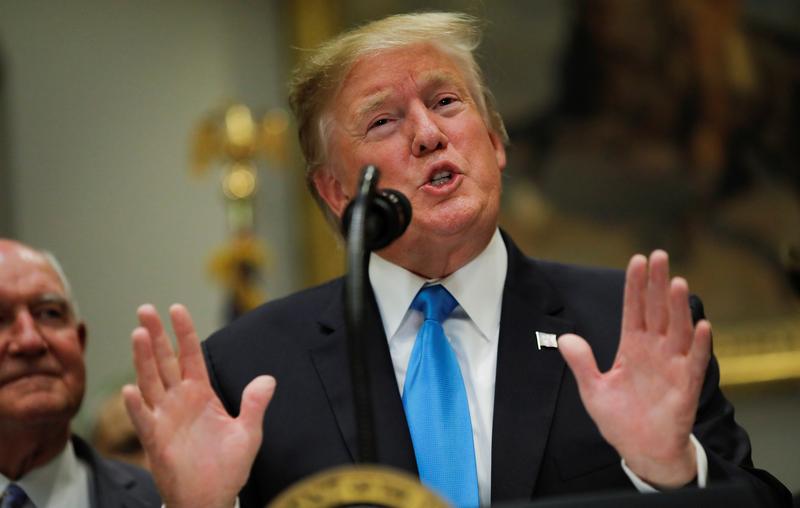 FILE PHOTO: U.S. President Donald Trump speaks about a range of subjects including failed infrastructure talks with Democratic lawmakers, as Agriculture Secretary Sonny Perdue listens during an event to discuss administration efforts to “support America’s farmers and ranchers” in the Roosevelt Room of the White House in Washington, U.S., May 23, 2019. REUTERS/Carlos Barria/File Photo

Trump signed the order during a visit to an ethanol plant in Council Bluffs, Iowa.

The executive order, he said, would “speed up reviews of biotechnology so that farmers can get access to critical scientific advances faster and reap the full benefits of American innovation for many years into the future.”

The White House said in a statement the order “will help eliminate delays, reduce developer costs and provide greater certainty about the review process for farmers.”

The Biotechnology Innovation Organization, an industry group that represents companies such as Bayer AG, said the order was an “important step forward to ensure government policy does not hinder 21st-century biotechnology from addressing the many global challenges.”

“America is on the threshold of entering a new era of sustainable agriculture and food production, and it’s important we get this right for farmers, consumers, U.S. companies, and the world as a whole,” said Jim Greenwood, chief executive of the organization.

The order directs the U.S. Department of Agriculture, the Food and Drug Administration and the Environmental Protection Agency to work together on “common sense regulations and to develop awareness and education programs to gain acceptance of new technologies by consumers and global trading partners,” the National Pork Producers Council said.

The United States is falling behind countries such as Canada, Brazil and China that have established regulatory frameworks conducive to investment in the development of gene editing, said David Herring, president of the pork council and a hog farmer from Lillington, North Carolina.

“Today’s executive order paves the way for common sense regulation to keep America first in agriculture so that we remain the global leader in an economic sector that has offset the U.S. trade imbalance for decades,” Herring said.

Unlike traditional genetically modified organisms, in which a gene is added from another organism, gene editing works like the find-and-replace function on a word processor. It finds a gene and then makes changes by amending or deleting it.

Scientists can edit genomes more precisely and rapidly than ever before, and altered agricultural products could get to market more quickly and cheaply.

The United States told the World Trade Organization on Friday that it was planning to revise its regulations on importing, transporting and releasing GMOs.