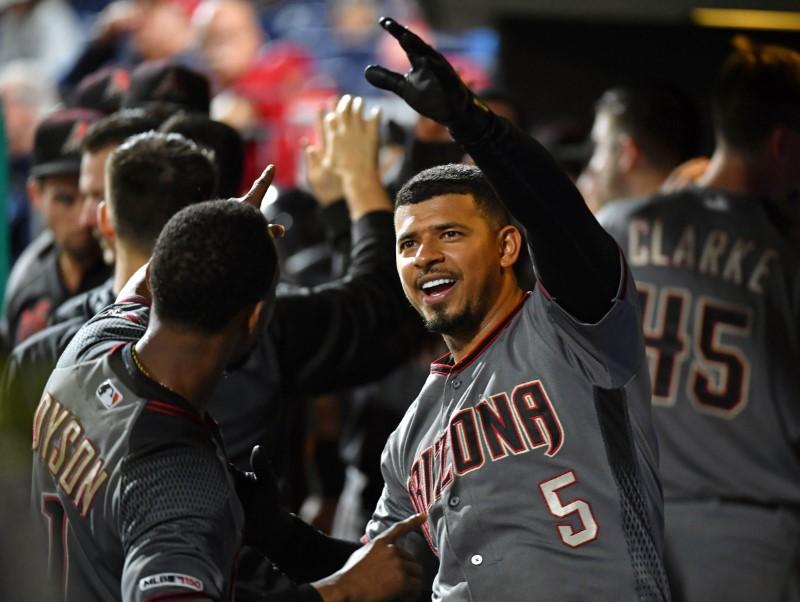 The Diamondbacks hit a franchise-record eight home runs, and they combined with the Phillies for a major-league-record 13 homers as Arizona won 13-8 at Philadelphia on Monday.

Marte had three hits and two runs as the Diamondbacks won their fifth in a row. The Diamondbacks’ previous season high for home runs in a game was five.

The Phillies added five home runs — two by Scott Kingery and one apiece for Jean Segura, Rhys Hoskins and Jay Bruce. Kingery also had a triple in his 3-for-5 game for the Phillies, who dropped their second in a row.

Ryan McMahon had a tiebreaking single in the eighth to lift the Rockies. Scott Oberg (4-0) pitched an inning of relief, and Wade Davis got the final three outs for his eighth save.

The Angels pushed across two runs in the bottom of the eighth without benefit of a hit as they won for just the third time in the past eight games.

Ty Buttrey (4-2) worked the eighth, and Hansel Robles worked out of a ninth-inning jam for his eighth save. Chris Taylor delivered a two-run double for the Dodgers, who fell for only the fourth time in the last 17 games.

Host Atlanta hit a season-high five home runs, including two by Ozzie Albies and a grand slam by Ronald Acuna Jr., and the Braves rolled over Pittsburgh.

Acuna delivered his 15th homer to highlight a five-run outburst in the second inning that erased a 1-0 deficit and put the Braves ahead to stay. Albies added a solo homer in the third and another in the seventh, his eighth and ninth. Freddie Freeman hit his 18th homer in the fourth, a two-run shot.

Atlanta third baseman Josh Donaldson and Pittsburgh starter Joe Musgrove and manager Clint Hurdle were ejected in the first inning. Donaldson was grazed by a fastball and exchanged words with Musgrove. Donaldson shoved catcher Elias Diaz, who was trying to shield his pitcher, and players from both teams rushed onto the field.

Aided by three home runs, Charlie Morton extended his unbeaten streak to 21 games with seven shutout innings as Tampa Bay won the opener of a three-game series with Oakland in St. Petersburg, Fla.

Brandon Lowe, Kevin Kiermaier and Ji-Man Choi hit two-run homers, helping the Rays prevail in their first meeting of the season with the A’s.

Morton (8-0) struggled early but retired the last 14 batters he faced before turning a 4-0 lead over to the Tampa Bay bullpen. The veteran, whose unbeaten streak began last August against Oakland, allowed just two hits and two walks in his seven innings. He struck out seven.

Elvis Andrus hit a tiebreaking single in the 11th inning as Texas rallied past host Boston to begin a four-game series.

Andrus’ game-winner drove in Danny Santana, who began the frame with his fourth hit of the game, a double. Jesse Chavez (2-1) escaped a bases-loaded jam with two outs in the 10th to get the win for Texas, and Chris Martin pitched a perfect bottom of the 11th for his second save.

Ryan Brasier (2-3) took the loss for Red Sox, who tied the game in the bottom of the ninth after blowing the lead in the top of the ninth.

Ozuna went 2-for-3 with a double, a single and a walk as the Cardinals snapped a three-game losing streak despite getting just four hits. Ozuna is 5-for-7 in his past two games and is hitting .462 in seven career games against the Marlins.

Wacha (4-2) improved his career record against Miami to 3-0. He allowed five hits — all singles — and two walks, striking out four in his first win since May 9. He had been relegated to the bullpen after losing his second straight start on May 22.

Washington’s 16-hit attack proved to be plenty of support for Sanchez (2-6), who limited Chicago to one run on four hits and one walk with one strikeout.

The opener of the annual Subway Series between the New York Yankees and New York Mets at Yankee Stadium was postponed due to heavy rain.

The game will be made up as part of a day-night doubleheader Tuesday.