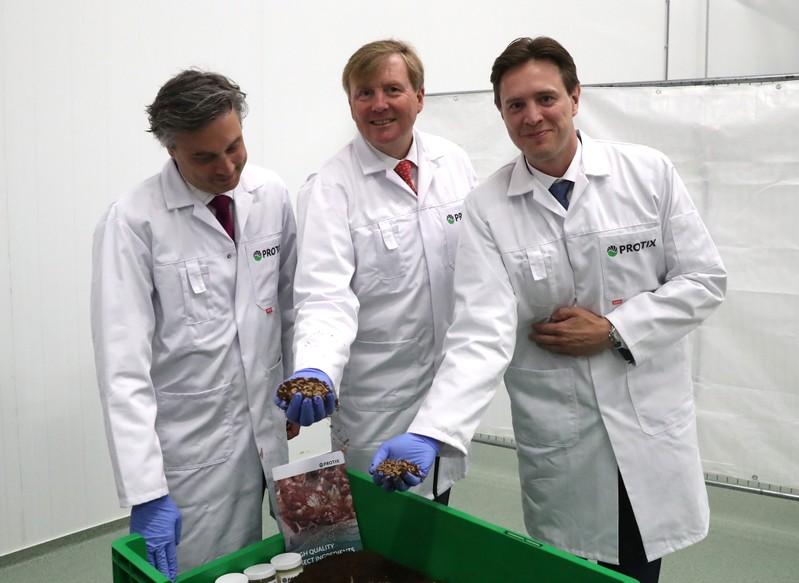 Co-founders of Protix Tarique Arsiwalla and Kees Aarts, pose next to Dutch King Willem-Alexander as they hold larvae of insects in the first farm capable of large scale production of insects for use in animal feed that opened in Bergen-op-Zoom, Netherlands June 11, 2019. REUTERS/Yves Herman

On Tuesday, the company opened one of the largest known farms dedicated to producing insects for use in animal feed, as it looks to boost output of cheap, environmentally friendly protein.

The Netherlands’ King Willem Alexander attended the opening and donned gloves to run his hand through a container of larvae.

“He was unafraid,” CEO Kees Aarts told Reuters in an interview.

Aarts described “the sensation of the energy that comes from the growth of the insect” as “beautiful”.

Protix produces larvae of the Black Soldier Fly, known for its rapid growth, on a base of plant waste under artificial light. At harvest time, the larvae are shaken free, washed, and ground into paste, Aarts said.

Its new, 14,000 square meter, 45 million euro ($51 million)production facility is located in the town of Bergen Op Zoom, near the Belgian border.

The company separates the paste into protein and lipid (fat) products, both of which are useful in feeds.

Feed giant Nutreco has signed a supply deal with Protix for use of the protein in fish feed. Protix also sells to egg-laying chicken farmers and to pet food makers, where it meets demand for animals that are allergic to other forms of protein.

European law currently prohibits the use of animal proteins in feed mixes for livestock and poultry intended for human consumption, a legacy of measures taken to prevent mad cow disease.

Protix is one of several firms lobbying for a exception to that rule for insect protein, which is not linked to the disease.

The company sells leftover insect material as a soil enricher.

Protix employs 130 people, half of them at the Bergen op Zoom farm. Aarts said the company is looking to open more farms within two years.

(The story corrects to show leftover insect material used as a soil enricher not as a fertilizer in paragraph 13.)