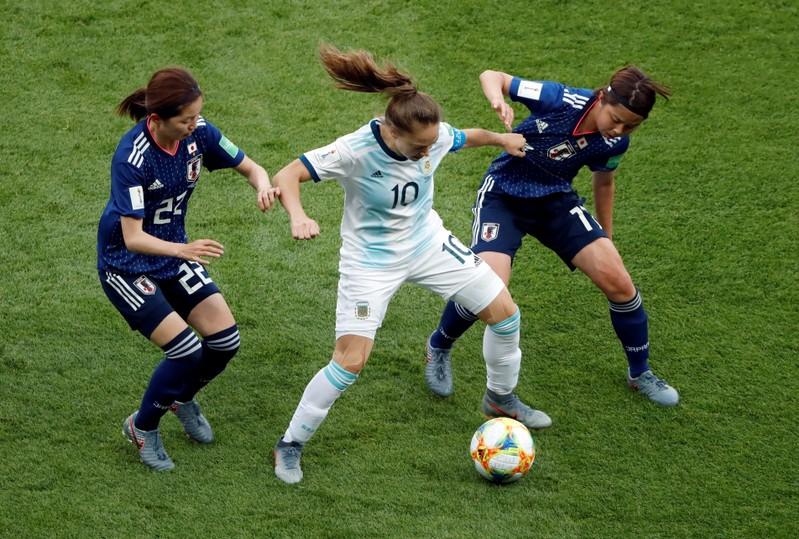 (Reuters) – Japan’s quest to reach a third consecutive women’s World Cup final began with a dull goalless draw as Argentina claimed their first-ever point at the tournament on Monday.

Asako Takakura’s Japan, ranked seventh in the world, kept almost two-thirds of ball possession in Paris but struggled to find a way past a disciplined Argentine center-back pairing of Agustina Barroso and Aldana Cometti.

Japan’s only meaningful chance came just after the interval when forward Kumi Yokoyama’s long-range effort forced goalkeeper Vanina Correa into her first save, before Yuki Sugasawa blasted the rebound over the bar.

The result ensured Carlos Borrello’s Argentina avoided defeat for the first time in a World Cup match, having lost each of their previous six games in the competition.

They finished bottom of their group on both previous occasions they had reached the World Cup finals in 2003 and 2007, and captain Estefania Banini believes this result can act as a springboard for the rest of the campaign.

“This point is really important for us. I think we’re able to reflect upon what Argentina is and what it means as a team,” the forward said.

“We had to run all the time, be focused all the time because we were facing a team that – in terms of their gameplay – were superior to us.

“We believe that we can continue fighting and we can get more points on board, and not go home with just one.”

Japan, who lifted the World Cup in 2011 by defeating the United States, will be disappointed with their sluggish display in the final third after recording just three attempts on target.

“We don’t set out to be defensive against any team,” coach Takakura said. “But the players were cautious today.

The other game in Group D took place on Sunday, with England taking top spot after beating Scotland 2-1 in Nice.

Japan meet Scotland in their next match at Rennes on Friday, while Phil Neville’s England take on Argentina in Le Havre on the same day.