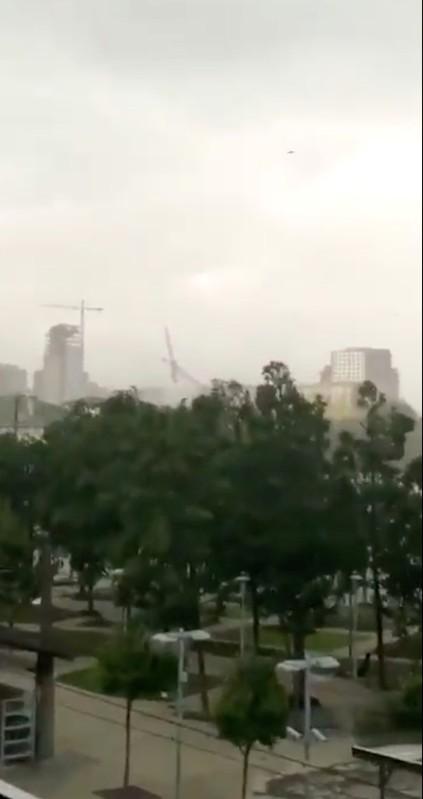 (Reuters) – A construction crane, apparently toppled by high winds, collapsed onto an apartment house in Dallas on Sunday and sliced through five floors of the building, killing at least one person and injuring six others, a city fire and rescue spokesman said.

A construction crane collapses amidst high winds in Dallas, Texas, U.S., June 9, 2019 in this still image taken from a social media video. Sophie Daigle via REUTERS

The building’s parking garage was also heavily damaged, and authorities planned a thorough search of the entire structure for anyone else who may have been trapped or killed inside, the spokesman, Jason Evans, told reporters at the scene.

“We’re hoping that what we have at this point is where it ends” in terms of casualties, Evans said during the televised news briefing.

The collapse occurred just before 2 p.m. CDT as a bout of severe weather blew through the city, according to Evans and a number of eyewitness accounts reported in the news media.

A nearby resident identified as Abbey Kearney told CNN that she and her husband saw the crane come down on the Elan City Lights apartment building in downtown Dallas just as extremely high winds kicked up in the area.

“It just sliced through the building … like a hot knife through butter,” she said.

Evans said one person was found dead in a residential portion of the five-story building hardest hit by the fallen crane, and six others were taken to hospitals, two of them in critical condition.

Local media reports said the person who died was a woman.

While the precise cause of the accident was not immediately determined, Evans said there was a “strong possibility that yes, the wind did play some role in the collapse of the crane itself.”

The crane broke into several pieces that fell into different portions of the apartment building, located across the street from a large construction site, Evans said. He said did not know whether the crane was in operation at the time.