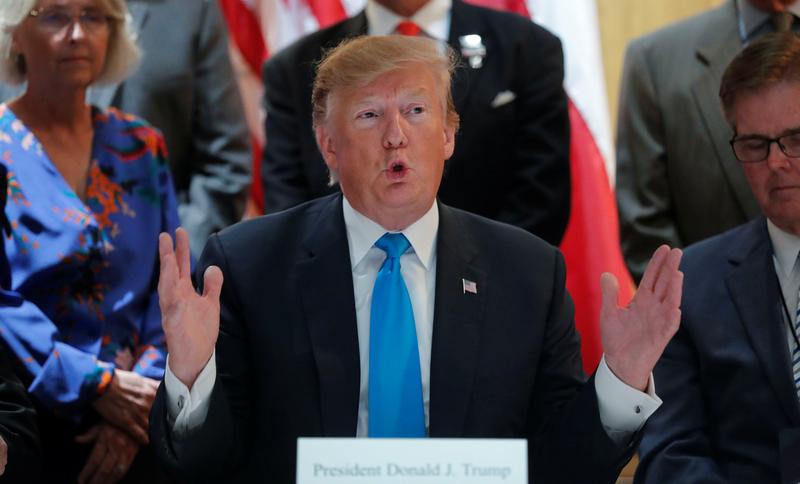 WASHINGTON (Reuters) – U.S. President Donald Trump defended his administration’s deal with Mexico against criticism that there were no major new commitments to stem a flow of Central American migrants crossing into the United States, and said on Sunday more details would soon be released.

Key aspects of the agreement are still unclear, including whether Mexico has pledged to buy more U.S. agricultural products and if the deal materially expanded a previous commitment by Mexico to more vigorously police its southern border with Guatemala.

Top Democratic senators said many aspects of the deal were not new, while the Mexican ambassador to the United States declined to confirm whether it contained any commitments on agricultural goods.

The deal, announced on Friday after three days of talks in Washington, averted Trump’s threatened imposition of 5% import tariffs on all Mexican goods that had been due to start on Monday unless Mexico committed to do more to help reduce an increase in migrants arriving at the U.S. southern border.

“Mexico was not being cooperative on the Border…and now I have full confidence, especially after speaking to their President yesterday, that they will be very cooperative and want to get the job properly done,” Trump said on Twitter.

“Importantly, some things not mentioned in yesterday press release, one in particular, were agreed upon. That will be announced at the appropriate time,” he added.

Trump did not elaborate and the White House and State Department did not immediately respond to requests for comment.

The agreement expedites a controversial program known as the Migration Protection Protocols which was announced in December. That program sends migrants seeking asylum in the United States to wait in Mexico while their cases are being processed.

Friday’s agreement would see the United States immediately expand the implementation of the MPP across its entire 2,000-mile (3,220 km) southern border, the State Department said on Friday.

The deal will also see Mexico deploy the National Guard police force to its southern border, where many Central American migrants enter Mexico.

On Saturday, a New York Times report, citing officials from both countries familiar with the negotiations, said most of Friday’s deal had already been sketched out in March, when Mexico agreed to deploy its National Guard throughout the country, with priority given to the southern border.

Trump on Sunday tweeted that the Times report was false, adding: “We have been trying to get some of these Border Actions for a long time, as have other administrations, but were not able to get them, or get them in full, until our signed agreement with Mexico.”

Senate Democratic leader Chuck Schumer also said there appeared to be little new in the deal, adding it was a “bogus” solution used by Trump to get out of an ill-conceived tariff threat.

“This is likely to have only a small impact on solving the root causes of Central American migration because many of the components are things Mexico had already said they would do,” Schumer said on Twitter.

There is further uncertainty around Trump’s comments on Saturday that Mexico had agreed to “immediately begin” buying “large quantities” of agricultural goods from U.S. farmers.

Mexican officials have not confirmed any new agreement on agricultural products. Asked repeatedly about such a deal on CBS on Sunday, the Mexican ambassador to the United States, Martha Bárcena Coqui, said only that trade would increase without the tariffs. She said there were many details discussed during negotiations that were not in the written declaration.

She noted Mexico was already a top U.S. trade partner in agricultural products. Mexico is the top importer of U.S. corn, wheat, pork and dairy by volume.

On Saturday, Mexico’s minister of foreign affairs Marcelo Ebrard tweeted that the deal should boost economic growth and therefore demand for U.S. agricultural products, but he also stopped short of saying that the deal contained a commitment on Mexico’s part to purchase more goods from the United States.