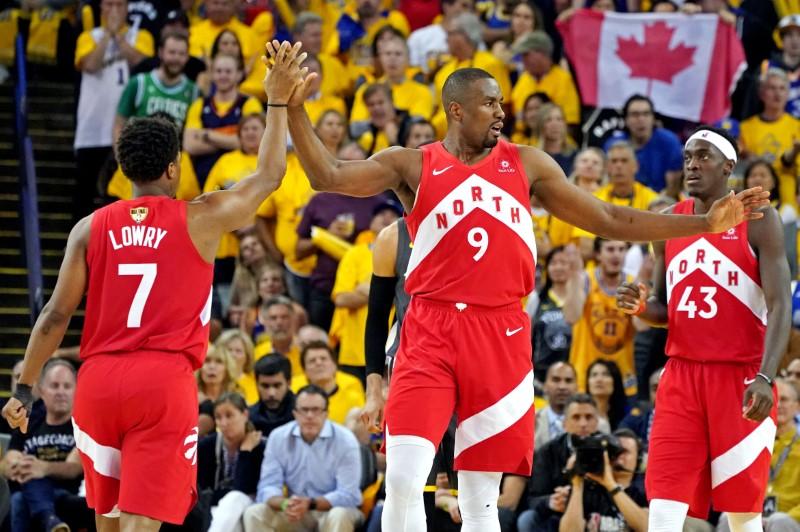 The Toronto Raptors will try to complete their historic mission in front of their home crowd Monday night against the Golden State Warriors in Game 5 of the NBA Finals.

By winning both games in Oakland, the Raptors have a 3-1 lead in the best-of-seven series and can clinch their first NBA title with one more victory.

The Raptors were relatively calm after their 105-92 victory on Friday.

“We haven’t done anything,” Raptors guard Kyle Lowry said after the game. “We won three games. It’s the first of four. We understand that. They’re the defending champs, and they’re not going to go out easy. They’re going to come and fight and prepare to play the next game, and that’s how we’re preparing ourselves, that we have to — we got to prepare ourselves to play the next game.”

The Warriors have experience on both sides of a 3-1 series margin. They were down to the Oklahoma City Thunder in 2016 in the Western Conference semifinals and won, then led the NBA Finals 3-1 that year against the Cleveland Cavaliers and lost.

“We go to Toronto and we try to win a game,” Warriors coach Steve Kerr said. “It’s as simple as that. So we’re not thinking about winning three games, we’re thinking about winning one game and that’s the task. So I know we’re capable. We got a lot of talent and we got a lot of pride, and these guys have been to the Finals five straight years for a reason. They’re unbelievably competitive. And they’re together, and they’re going to fight. They’re going to fight the whole way.”

“We’ve got to win one game,” Warriors forward Draymond Green said. “We win one, then we’ll build on that. But I’ve been on the wrong side of 3-1 before, so why not make our own history?”

Golden State received a boost for Game 4 when Klay Thompson and Kevon Looney returned to the lineup and played well after missing Game 3 with injuries.

But the Warriors were still no match for the Raptors, led by Kawhi Leonard. Toronto took over Game 4 in the third quarter.

Meanwhile, the Warriors have been without Kevin Durant for the series and his availability for Game 5 uncertain. The two-time Finals MVP has missed the last nine games with a calf injury, but returned to practice on Sunday.

The atmosphere in Toronto is charged with anticipation and excitement.

“They’re going to be going crazy in Toronto,” Raptors coach Nick Nurse said. “And my message to (the team) is we have never really talked about the series score, can’t let people take you someplace you aren’t yet, right, and we know this is a great team and we know how hard we have to play to beat them.”

Leonard has not only led by his brilliant postseason performance, but by his calm approach that has influenced the team.

“It doesn’t matter until you get that fourth win,” Leonard said. “We just have to stay confident in ourselves, be patient, don’t try to rush things, and see how it plays out.”

The Raptors’ run for the title has captivated Canada, but Leonard had difficulty expressing what it would mean to Toronto and the country should they clinch the championship.

“I’m really not sure,” he said. “I guess you really would have to ask somebody on the street or one of our fans. I’m pretty sure it’s a long time waiting. They’re going to be excited. I mean, they’re already excited just as us just being here for the first time. They’re going crazy after the Eastern Conference Finals and — I don’t know, there’s no telling. You got to ask probably, like I said, a fan or somebody that’s in Canada, been living in Canada for a while. But I know they’re going to be super excited.”