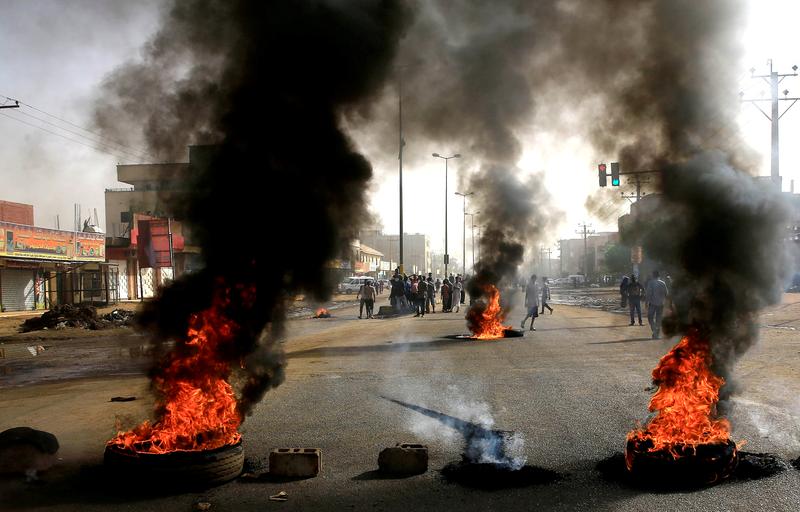 FILE PHOTO: Sudanese protesters use burning tyres to erect a barricade on a street, demanding that the country’s Transitional Military Council hand over power to civilians, in Khartoum, Sudan June 3, 2019. REUTERS/Stringer

Opposition and protest groups had called for workers to stay at home after security forces stormed a protest camp on Monday, killing dozens and dealing a blow to hopes of a peaceful transition after ex-President Omar al-Bashir’s ouster in April.

The raid came after weeks of wrangling between the military council that took over from Bashir and the Declaration of Freedom and Change Forces (DFCF) alliance, over who should control a transition leading to elections.

On Sunday morning, the start of the working week in Sudan, few pedestrians or vehicles could be seen in the streets. Public transport was barely functioning and most commercial banks, private companies and markets were shut.

Some state banks and public utility offices were working normally.

At Khartoum airport, where very few flights were operating, travelers crowded the departure hall. Most travel agencies were closed because of an internet outage, and ticket prices soared.

In Khartoum North, across the Blue Nile from the center of the capital, police fired tear gas to scatter protesters. There were no reports of casualties.

Demonstrators have been trying to barricade roads in the capital over recent days as a way of sustaining the protest movement.

Also on Sunday, Sudanese state TV reported that a senior commander of the Rapid Support Forces (RSF), Mohamed Abdallah, had been replaced.

Opposition medics say 117 people were killed in the storming of the camp outside Khartoum’s Defence Ministry and subsequent security crackdown. The government has put last week’s death toll at 61, including three members of the security services.