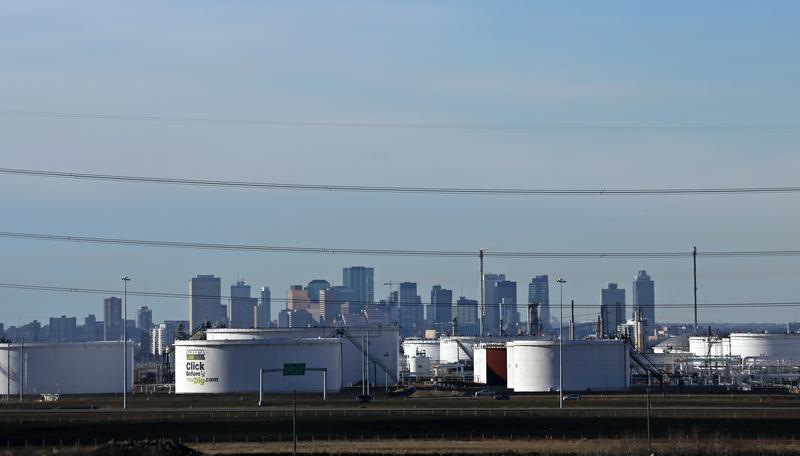 Canada holds the world’s third-largest crude reserves, but years of delay in building new pipelines has led to oil production outpacing takeaway capacity. A glut of crude has thus been created, increasing demand for storage tanks in the oil sands province of Alberta, which this year introduced production cuts to deal with the oversupply.

The opportunity for traders comes from monthly pipeline “apportionment”, when demand to ship crude on certain pipelines exceeds capacity, forcing pipeline operators to ration the number of barrels each shipper can move.

The practice is a long standing source of frustration for Canadian producers but offers a lucrative, though risky, play for traders able to swoop in and capitalize on post-apportionment price volatility.

One Calgary-based trader said that 37 million barrels is as full as storage can get and that anybody with tankage has been making money.

Genscape monitors roughly 62 million barrels of storage in western Canada but at most only 67% is utilized because of pipeline operations and the need to separate grades.

Some traders and storage companies are benefiting.

Mercuria holds leases on about 3 million barrels of western Canadian storage capacity, according to a source familiar with the matter. Mercuria declined to comment.

BP does not disclose its storage lease position in Canada but the company owns large refineries in the U.S. Midwest which run Canadian heavy crude. BP also declined to comment.

Traders with access to space in tanks can snap up cheap barrels, store them for a month, and sell them on at the start of the next trade cycle when prices are typically stronger.

Storage rates are not publicly disclosed and vary widely, with long-term tankage cheaper than short-term. One trading source said three-month deals were being offered at around $2 per barrel per month.

A four-year deal in Canada costs about $1.50 a barrel a month compared to 30-40 cents per barrel in the U.S. Gulf Coast, other sources said. Monthly storage rates at the U.S. futures hub of Cushing, Oklahoma, are about 30 cents a barrel.

Rates in Canada are expensive, said another source, “but I guess if you can make that all back after apportionment, it’s well worth it.”

Companies including Gibson Energy Inc, Enbridge Inc and TC Energy Corp own most of the storage in western Canada, and are also benefiting from high demand to lease their tanks.

Gibson is the dominant storage owner in Hardisty, with 10 million barrels built and this year sanctioned another 2.5 million barrels. Its storage contracts are all long-term leases, averaging 10 years, and its main customers are large oil sands producers.

“We get requests all the time for short-term storage but we do not have tanks to do that,” Gibson Chief Executive Officer Steve Spaulding said.

“Storage is so valuable because you need somewhere to put barrels right now. That’s what Gibson is taking advantage of,” Walls said.