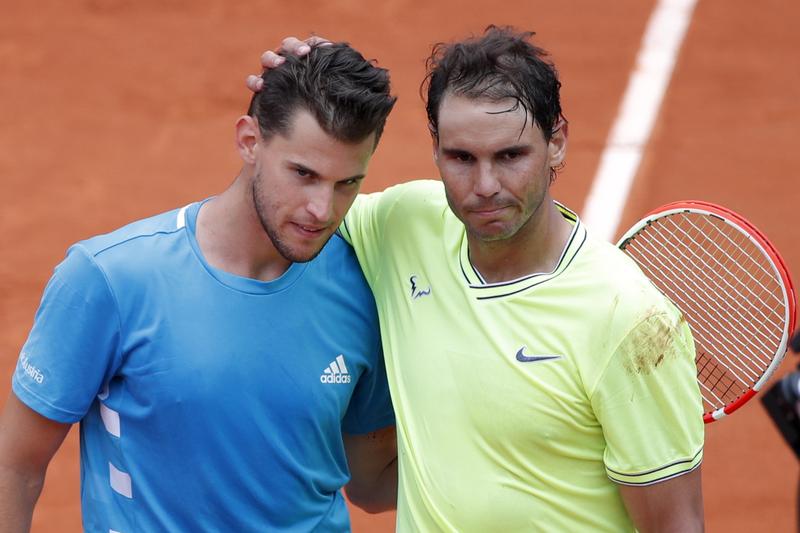 PARIS (Reuters) – Dominic Thiem achieved something few players have ever managed in any of Rafael Nadal’s 12 French Open finals on Sunday.

There were moments in the opening two sets when the level of the Austrian fourth seed’s play was so far off the charts that Nadal’s trademark worried look betrayed real anxiety.

The Spaniard’s concern was there when Thiem clattered a forehand into the corner in the fifth game of probably the most brutal start to any French Open final. Nadal scooped it back but Thiem pounded away a smash to claim the first break.

The disquiet reappeared in the seventh game when Nadal, having just broken back, was stretched to creaking point by a vicious Thiem onslaught, chased down a drop shot, then flailed away at thin air as his opponent teased a lob over his head.

It was there again when Thiem broke serve in the 12th game of the second set to level the match and send the Court Philippe Chatrier crowd into uproar.

There were plenty of other passages of play when Nadal looked to have finally met his match.

But as it was, Thiem’s look of hope faded to resignation when Nadal, as always, showed that when firing on all cylinders he is an unstoppable force of nature on Parisian clay.

The Austrian was one of only two players to grab a set off Nadal this year — the other being Belgian David Goffin.

That will not lessen the pain of losing his second Grand Slam final, albeit once again to the best claycourt player ever, but when it fades Thiem will realize that he is getting closer to claiming the title he dreamed of as a junior.

“I think that I developed my game,” Thiem, whose semi-final win over world number one Novak Djokovic took two days and ended only 23 hours before the final, told reporters.

“I was closer than last year I have the feeling, especially in the first two sets. So I’m on the right way. I failed today, but my goal and my dream is still to win this tournament or to win a Grand Slam tournament.

“I will try my best next year again.”

The trouble for Thiem is that clay is the surface which best suits his heavy topspin baseline game and on Sunday’s evidence the 33-year-old Nadal is not yet ready to spend his June days fishing off his native Mallorca.

The Austrian knows the only way he will dislodge the 12-time champion, other than waiting for him to quit, is to add another level to the swashbucklingly classical tennis he displayed on Sunday.

“He (Nadal) also improves and develops his game,” Thiem said. “I mean, if he didn’t do that, for sure he wouldn’t have that success every year in this tournament.

“I think we both got better compared to last year, so my goal is to improve even more and come closer and closer.”

After squaring the match on Sunday, Thiem lost 17 of the first 18 points in the third set as his hopes went up in smoke.

But he refused to blame playing for a fourth day in a row after weather wrought havoc with the schedule.

“I felt fine physically. The first set was unbelievably intense,” he said. “Maybe I had a little drop in the third, I don’t know. Against other players, it’s not that dramatic.

“He came out in the third set like a rocket, full power.”