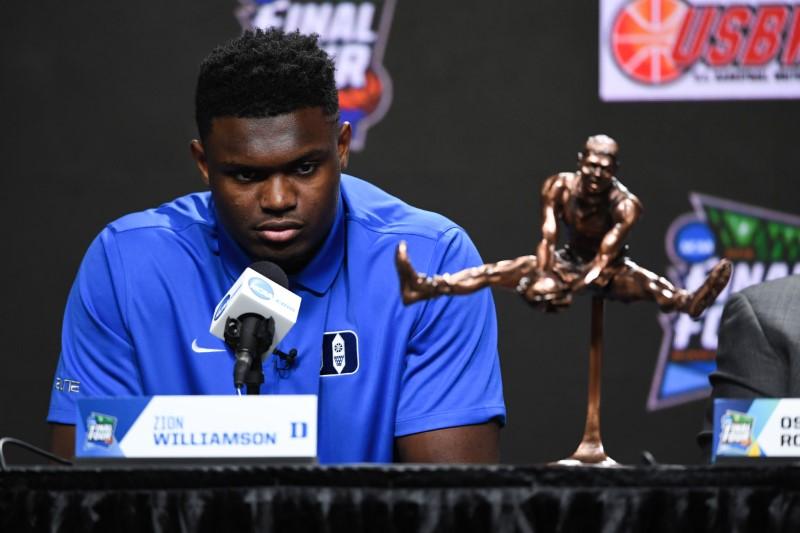 Zion Williamson created the type of viral anticipation reserved only for the great ones in his single season at Duke.

Only a few players of recent vintage — LeBron James in 2003 is the standard bearer — elicit the type of response from fans that Williamson did with the Blue Devils.

The New Orleans Pelicans’ timely lottery win puts a franchise in transition into position for an about face with Williamson as the new building block around which vice president of basketball operations David Griffin can erect a contender in the Western Conference.

As former No. 1 pick Anthony Davis (2013) celebrates his new start alongside James with the Lakers, the stage is set for Williamson and a new cast likely to include another top-five pick Thursday.

How will the first round play out?

Williamson is an athletic freak of nature with Defensive Player of the Year instincts and explosiveness to challenge any shot he wants to swat. Less certain is how his game evolves from dunk-a-thon to his future fit as an NBA power forward.

Maybe the most natural playmaker in the draft, Morant has All-Star ability as a passer and scorer. Even if the Grizzlies show up in the lottery again next summer, a core taking shape shows there’s a path out of the Western Conference cellar.

Maybe the Knicks’ reported love for Darius Garland is genuine, but Barrett is built for the NYC spotlight and suits the blueprint in place for the evolving Knicks.

There is some Joe Johnson in Culver’s game. He projects as a plus scorer and defender while fitting a need in New Orleans immediately alongside Jrue Holiday.

Culver would be the preference, and the Cavaliers could opt for Virginia forward De’Andre Hunter, but Reddish gets the nod because of his range.

If the Knicks go Garland, the Suns are a candidate to trade out with the Atlanta Hawks or select the next best point guard in North Carolina’s Coby White. Garland paired with Devin Booker and Deandre Ayton would be a godsend for first-year coach Monty Williams’ building project.

Bigs have been the trend recently for the Bulls with Lauri Markkanen and Wendell Carter. Hunter does many things well but isn’t the big-ticket splash Chicago hoped for amidst a season of stockpiled losses.

A modern-day version of Marcus Camby, Hayes enters the NBA needing physical development to bring his game to the next level.

White becomes the salve the Wizards needed — but never expected to be able to get in this draft — to survive without John Wall in 2019-2020. A high-energy, ball-dominant point, White and Bradley Beal would work well together.

A perimeter marksman who could play well off of Trae Young, Herro is known for his in-the-gym range and serves as a luxury pick who also should be a safe-ish selection.

Doumbouya is raw and recognized more for his defense at this stage, but Ryan Saunders and the Wolves can buy into a high upside project at this spot.

A combination guard with length to be a plus-defender, Alexander-Walker is the type Michael Jordan can envision an immediate role for.

Pat Riley likes proven players from proven programs. Little is explosive and competitive with the type of natural gifts that indicate he’ll be much more than he was at North Carolina.

Already seasoned as the pace-and-space 4 in Gonzaga’s offense, Hachimura contributes quickly and becomes the heir to Marcus Morris in 2020.

An athletic and versatile piece to mix into the still-developing equation in Orlando, Washington is unlikely to fall beyond the middle of the first round because NBA scouts are sure he’s going to contribute.

An NBA rarity these days, Bitadze was evaluated as a true center. Some see potential for him to develop into a stretch option and down-the-road answer at the 5 for the Hawks.

Johnson should be a rotation guard at the very least, and with Victor Oladipo recovering from quadriceps surgery, starting isn’t out of the question as a rookie.

There’s a lot to like about Clarke, including his size and defensive potential, but Gregg Popovich will most value his versatility.

The best defensive player in the draft in the notebook of many scouts. Thybulle, whose wingspan is 7-foot-1, paired with Marcus Smart would mean a long day at the office for Eastern Conference combo guards.

A gamble on upside and potential after Langford grinded through injuries during his only season at Indiana.

At next to no cost, the Celtics land one of the best pure shooters in the draft. He’ll catch and shoot no matter who does the table-setting for Boston this season.

A defensive presence behind Rudy Gobert who showed at the NBA Scouting Combine he could evolve as a stretch 4.

With Joel Embiid likely in need of skimmed minutes, Bol is not ready to contribute in a big way. But as a 7-foot-1 perimeter player, the 76ers could add him to their intriguing blend of young talent for the matchup-minded Brett Brown.

Strong and springy, Fernando would add a physical presence who can block shots and scrap for leftovers. He’s not LaMarcus Aldridge but brings enough of a mid-range shot to be a regular.

Likely a non-contributor as a rookie coming off of a torn ACL, Okeke can get to know the cast in Cleveland while training for a role as Kevin Love Light.

Microwave offense behind the already established offensive options for the Nets, and a ready spot starter should the Nets lure Kyrie Irving in free agency.

Calm and clutch under pressure with enough range to play here tomorrow, Jerome bears some similarity to Klay Thompson but lacks the bounce and explosiveness to become a lockdown defender.

With the selection shipped from Toronto via the Kawhi Leonard trade, Windler brings a deep shooter who doesn’t shy away from any competition, He could be the perfect fit for the Spurs.

Brook Lopez could be lured away in free agency, and Kabengele is not the same type of player, but he’s an energy-and-effort, athletic big man who can mop up misses and operate the pick-and-roll.